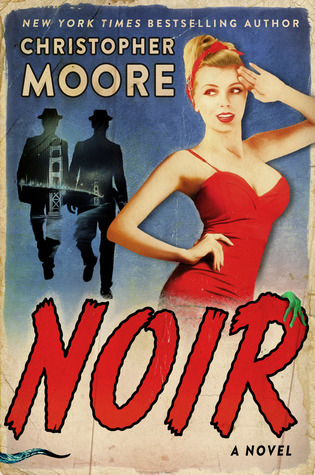 Ahh I can’t help myself. This one isn’t exactly fantasy… it’s more humour/mystery…ish. But, it’s sort of fantastical, in a way… so… yeah. 😀

I love Christopher Moore’s books. I’ve read, um… pretty much everything that he’s published at this point. A Dirty Job and Secondhand Souls (of which the hardcover glows in the fucking dark, guys) grace my favorites shelf, Fool and The Serpent of Venice are among my favorite audiobooks of all time, and Lamb was actually the first audiobook I ever purchased from audible (fuck, that was only 300 or so audiobooks ago, lol). So, naturally this was on my radar, and on my TBR.

So, there I was one day, subtly trying to figure out how I was going to use one audible credit to buy two books (or I guess trying to decide between two books – this being one of them) when at that precise moment… I got an email from Harper Audio saying I had won an audiobook from a goodreads giveaway. And it was this one!

Well then! 😀 Okay! Thank you for solving all of my audiobook prioritization problems Harper Audio.

It’s not every afternoon that an enigmatic, comely blonde named Stilton (like the cheese) walks into the scruffy gin joint where Sammy “Two Toes” Tiffin tends bar. It’s love at first sight, but before Sammy can make his move, an Air Force general named Remy arrives with some urgent business. ’Cause when you need something done, Sammy is the guy to go to; he’s got the connections on the street.

Meanwhile, a suspicious flying object has been spotted up the Pacific coast in Washington State near Mount Rainer, followed by a mysterious plane crash in a distant patch of desert in New Mexico that goes by the name Roswell. But the real weirdness is happening on the streets of the City by the Bay.

When one of Sammy’s schemes goes south and the Cheese mysteriously vanishes, Sammy is forced to contend with his own dark secrets—and more than a few strange goings on—if he wants to find his girl.

Now, I am the younger brother of an older brother who often measured the worth of a guy by his ability to not scream under pressure, and insisted, in fact, that if any screamlike sounds ever reached Ma and/or Pa, this younger brother, me, would receive a pasting such as I had never known, including severe and painful Indian burns to the bone — a threat my older brother, Judges, may he rest in peace, backed up with great enthusiasm through most of my boyhood.

So, first I closed the back door, made sure it was solidly latched, then I glanced through the doorway into the front of the bar, which was still dark, and only then did I scream. Not the scream of a startled little girl, mind you, but a manly scream: the scream of a fellow who has caught his enormous dong in a revolving door while charging in to save a baby that was on fire or something.

This quote is literally within the first 5 minutes of the book. I was already chortling.

This book certainly does its title justice. It is Noir AF… or at least it’s Noir-as-written-by-Christopher-Moore AF. Satirical, humorous, and of course noir-esque, at the very least. It follows the story of Sammy ‘Two Toes’ Tiffin, who is a bartender in San Fransisco, circa 1947. He is tending bar one normal day when a woman named Stilton (like the cheese, subsequently earning her the moniker ‘the Cheese’) saunters in and Sammy… well he sort of falls for her. Maybe not at first sight, but after a date or two, and some of the ol’ razzmatazz, he finds that he’s got it hard for this gal.

Around the same time, his boss introduces him to an Air Force general named Remy, who is out of a base in some place in the middle of nowhere called Roswell. Remy’s in need of something very specific, and Sammy, with all his street smarts, is just the guy to find it. Or so his boss thinks. The same boss he owes. So, he’d better get right on that.

Meanwhile, Sammy and his friend Eddie Moo Shoes decide that they’ll make some extra cash by selling snake whiz to some old Chinese guys that Eddie knows, as an aphrodisiac of course… but his nosy boss opens the snake box while Sammy’s out. bitebitebite!

Then, Stilton mysteriously disappears. So, Sammy starts investigating, to see if he can figure out where she’s gone. And shenanigans abound. Shenanigans like knocking out a crooked cop, trying to find and catch a missing snake, disposing of a frozen douchebag, and of course, running from strange men in black suits and sunglasses with a moonman in the back of your car.

The Narrator, Johnny Heller, did a great job. He gives the characters some pretty awesome voices, some of them rather Bogart-ish, and others rather Cagney-ish, which was pretty fitting. Many of the secondary characters were also really well narrated, and given great accents, and that really made this book work for me. For example, the shady Italian bar owner sounded rather like Vito Corleone, which was awesome. And then there’s Petey…. he’s the snake. Oh, he’s a talking snake, by the way…. bitebitebite! So, the narration made this book a lot more enjoyable for me. That’s kind of why I love Christopher Moore’s books in audio format. Paired with a good narrator that can deliver the lines for maximum hilarity, you’ve got yourself a fun time with an audiobook from The Author Guy. No exception here. This might be the first audiobook I’ve listened to that I haven’t been able to comfortably turn the speed up on though. I don’t know if this is because I listened to it on a program I’m not used to, or what. But that was a thing.

All told, I really liked this one, though not as much as I loved some of Moore’s other work. To be honest, that’s probably because I don’t particularly love film noir to begin with. But then, I think The Maltese Falcon, Out of the Past (above), The Big Sleep, and Double Indemnity are the only classic film noir that I have ever seen all the way through. So who knows. Perhaps more research is required. 😀

Either way, this one gets 4/5 stars from me, simply for making me laugh so much. It’s not Fool, it’s not Lamb, and it’s not A Dirty Job… but it’s still a pretty great use of 9 or so hours of your time.