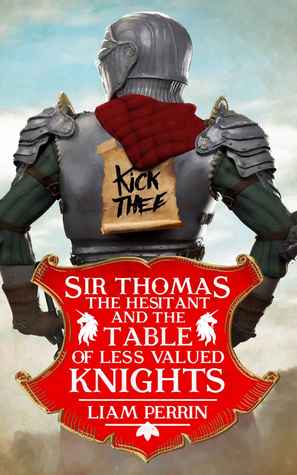 This is one of those books that I hadn’t really heard of until a few people in my sphere (it’s more of a rhombus, really) of social media were talking about it and I read a review or two…. and said to myself – ‘I need this book in my life!’

The author was then so nice to offer me a copy of it to read, so I of course accepted.

Whimsical and poignant, Sir Thomas the Hesitant and the Table of Less Valued Knights tells the story of Thomas Farmer who dreams of becoming a knight, sets out to save his brother from the hands of an evil Baron, and uncovers a plot that threatens Camelot itself. Along the way, he befriends a series of misfits including an allegedly reformed evil wizard, a shrinking giantess with a latent gift, a veteran knight with a dark secret, and his best friend Philip the Exceptionally Unlucky.

In the end, his friends must all join forces and Thomas must come to grips with what it means to be a true hero if they are to outwit the evil Baron. At its heart, Sir Thomas’s tale is the story of a young man growing up and learning what it means to be a hero in a world that doesn’t always make sense.

Arthur smiled and asked, “What do you think?”

I really liked this book right from the start. It’s often quite hilarious (in a faintly reminiscent way to Monty Python and the Holy Grail) to start, but nevertheless is plotted out well, with fun characters who I had a great time reading about, and tells a fun, original, and rather unique (for a story within the realm of King Arthur) story.

The story follows Thomas Farmer, who is… a farmer (gasp!) in the village of Fogbottom. The Baron of Fogbottom is letting all the people starve, despite having a pretty big store of grain, so Thomas’ older, much handsomer, much more popular brother William decides to go to the Baron, demanding that he use his stores of grain to feed the people. He’s then imprisoned, because the Baron is, well… a dick.

At the same time, Arthur Pendragon (KING OF THE BRITONS! …okay, sorry >.>) is getting married to Guinevere, and it’s such a happy occasion that he’s offering a boon to one person from every family in his kingdom. With his brother imprisoned, Thomas’ parents tell him to go and ask the king to pardon his brother. So, Thomas goes to Camelot, and asks Arthur to make him a knight… because follow your dreams, guys! 😀 But really, if he’s a knight, then he can solve that problem and many more!

Along the way, Thomas meets all kinds of interesting characters, including his new best friend, Philip the Exceptionally Disadvantaged (it means unlucky), an ex-evil wizard, and a shrinking giantess with self-esteem issues.

It’s well written, quickly paced, not overly long, funny as hell and really quotable. I highlighted many, many quotes that made me laugh over the course of my 4 or so hours with this book. It had legitimate twists and turns that I didn’t see coming, and a really satisfying ending too!

I do hope there will be more stories of the Less Valued Knights, because they’re awesome! I give it 5/5 stars!

3 thoughts on “Review: Sir Thomas the Hesitant and the Table of Less Valued Knights”