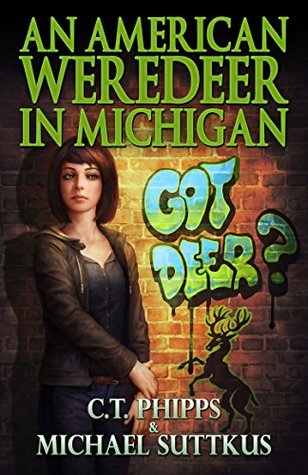 Having really quite enjoyed the first book in this series, I was happy to accept a review copy of the audiobook of the 2nd book as well.

Quick, fun listens like this are a great way to help me get work done!

So, I got a copy of this audiobook from (one of) the authors, and in exchange, this is an honest review of it. 🙂

Life is not easy for the world’s first weredeer detective. A simple hike turns into a media circus when Jane Doe, her best friend Emma, and a pair of monster hunters find a mass grave. Determined to find the parties responsible, Jane soon discovers a sinister cult leader has decided to make Bright Falls, Michigan the home of his corrupt religion.

As if this wasn’t complicating her life enough, Jane also has to decide whether or not she wants to begin a relationship with FBI Special Agent Alex Timmons or local crime lord Lucien Lyons. Both men are determined to get to the bottom of the crime she’s investigating but may be distracted by their own agendas–as well as their love for Jane.

The griffon let forth another ear-splitting howl before flying over near us, landing with a thump, and assuming a more leonine attack position. I pulled out the Merlin Gun, dropping my staff, and aimed at my attacker. “Ten points from Gryffindor!” Oh God and Goddess, that was terrible.

Well, at least she knows when the puns have gone a little too far, lol. >.>

This is the continuing story of Jane Doe (yeah) the weredeer from Bright Falls, Michigan. In this volume, she and her best friend are innocently walking out in the woods and they find a mass grave of infant children. And so the hunt is on to figure out what sort of monster could do such a thing, while at the same time trying to save her family’s diner from being sold and demolished to be turned into a shopping mall, and preventing a local group of cultists from moving into town and establishing a base there.

While on the case, Jane and Emma meet one of the (former) cultists, a young woman named Robyn, who seems to have a connection to the children in the mass grave. She joins the case with a vengeance for…. vengeance. Jane also gets much advice and additional information from the Merlin gun that she keeps in her pocket, which is inhabited by an angel, Raguel. Being an angel, he has a pretty convincing point of view on religious topics that come up, and they do more than you’d think, because the theme of belief plays a pretty big part in this volume. Raguel is a great character (kind of character? Sentient gun?) and I rather liked him snarking at Jane or correcting her on  religious or folklore trivia, hehehe.

Anyway, while Jane and her friends attempt to solve the whodunnit, we’ve got a love triangle happening between Jane and both Alex, the hot FBI agent, and Lucien, the hot drug dealer, who are foster brothers, and both still inexplicably want this girl. It has to be her sparkling personality, I guess. So, that’s still a thing. I’ll admit that I rolled my eyes a few times here in the beginning, because as some people might remember from my review of the first book in the series, I thought the romance between the three of them was hilariously contrived, but I guess if these two dudes are so determined be with this girl, then I guess it is what it is. I will give this one points for actually resolving the triangle in a way that makes sense and was satisfying. So, it’s less contrived now than it was at first. In the end, I admit that they make a cute couple, even if Jane makes some ridiculously stupid decisions along the way.

Jane is still nerdy AF, and throws out many a pop culture reference. Like a lot. So, if you’re not down with nerding out, maybe avoid this one. I thought many of them were enjoyable, and a few made me laugh. It feels like some were a little bit overused though. I mean, I’m not sure one UF novel needs two entire Star Trek Discovery references, and two entire ‘do or do not’ references. But, all the same, I nyyyeeeeerddded out, quite a bit throughout the whole thing. Today I learned (more) reasons I should not read further than I did into the Dune series. 😀

The narrator, Arielle DeLisle, did a great job with this one, just as she did with the last one. She gives Jane a really good voice, and tells her story very well, as this story is told in the first person. Robyn, Maria, Emma, and Kim Su also had really great voices. Even the dudes got some great voices.

All told I enjoyed this one quite a bit. It started out a little rocky for me but once I got into it, I couldn’t help but listen to the entire thing in one sitting. I got a lot of work done. 😀 I hope to hear more of this story, because if any of Jane’s visions come to pass, there appears to be a lot of awesome on deck!