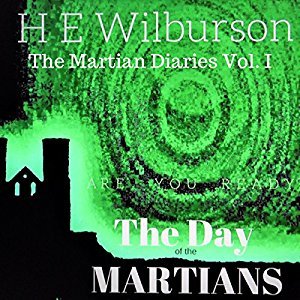 This was an audiobook request that sounded like an interesting premise, and it’s only 2 hours long so I jumped on it.

So, I received a copy of this audiobook from the author in exchange for an honest review, and here we go!

It is 1913 and the biggest question on the writer’s mind, is not whether he and his wife will eventually have children or perhaps move away from Maybury Road; it is where and when will the Martians return?

For 10 years or so, he has savoured the routine of his everyday life; but for how much longer can this comfortable existence continue? Unexpectedly, a Martian projectile from the earlier alien invasion is discovered in pristine condition, never opened and completely sealed from the Earth’s atmosphere. Are there Martians still alive inside it after a decade or more?

Shortly afterwards, a new and menacing Martian threat is observed in the sky. Really bad news has a tendency to come in threes….

During the brief but terrible Martian invasion, the writer had been a bystander, and to watch history repeat itself again is unthinkable. Instead of accepting the inevitable, he is driven to question obvious clues that may have been overlooked, choosing to act while there is still time.

In an unexpected turn of events, the writer takes his wife with him on a trek across the country to Wales. This journey becomes a revelation to them both as she becomes aware he guards secrets, and he is surprised by how resourceful, clever and fearless she is in her resolve.

The Earth is destined to become another Mars. Can an international attempt to save the planet succeed against all odds; or is it too little, far too late? The world awaits the Day of the Martians. Are you ready?

The Day of the Martians is written as a sequel to H.G. Wells’ War of the Worlds. It takes place 10 years after the Martians came to Earth with their heat-rays and it follows a man (presumably the same narrator as War of the Worlds) and his wife, as they investigate a projectile that has come from Mars to Earth and landed in Wales. The Martians, it seems, are planning on coming back to (spoiler alert for a book published in 1898) try and kill the bacteria that killed them the first time they came so they can get on with that invading and killing everyone thing.

The idea certainly had merit, but I will admit that I didn’t really love this audiobook, and it’s for a couple of reasons.

First of all, while the general narration of this story is quite good, there is a constant musical soundtrack playing in the background of it, and it got really distracting, and really old fast. Some of it is the sort of music that you would hear on an ambient trance album, so, while I understand that this is more-or-less sci-fi, the fact that it takes place in 1913 made this more modern music feel out of place and took me out of the story. There are times that the story and the music try and mingle together too. One part specifically sets out a bit of dialog (and it’s important dialog, don’t get me wrong) and mixes it into the music in what sounded like a really weird 80’s rock music remix of these 2 lines of dialog. Really, really odd. That was the only time that happened, so I’m not sure what purpose it served.

That said though, there are some cool sound effects at times that try and bring you back into the story, and it works sometimes, but again, sometimes these are sometimes over the top and overused. If the music wasn’t constantly going in the background, I might have been more inclined to give the overuse of some of them a pass, but it all mixed together at points and again, became distracting.

The writing itself wasn’t bad, and it told the story pretty well, though it certainly wasn’t Wells. I don’t know if I fully believed that we were in the timeframe that we were supposed to be in all the time, but that honestly could be due to the psy-trance beat happening in the background.

The narrator did a good job, all told. This story is told in the first person and he tells it quite well from the narrator’s point of view. He has a good voice for this sort of production, I think. It was certainly a production, but I’m not sure that it benefited from the level of production it got, in the end.

So, it wasn’t the worst audiobook I’ve listened to, and it was only two hours long so I don’t feel like it was a waste of my time at all, but I didn’t love it. I would have liked it quite a lot more had it not had a BGM soundtrack from a 90s adventure game/goa trance/random choirboy singing/piano concerto/easy listening guitar playing in the background. It was so bizarre at times and distracting that I couldn’t really stay engrossed in the story.

Thanks to the author for the review copy. 🙂