It’s that time of year again! Thankfully this trash fire of a year is nearly done, but once again, just as last year, this was a really fantastic year for books!

I’m always surprised by just how many books rock my socks off by the end of the year.

This year I’m going to stick to a strict top 10 and include books that were published this year – to avoid this thing being as long as it was last year, lol. This one also just happens to be pretty evenly distributed between self-published and traditionally-published books, which, while amazing, was a bit of an accident. Hooray for that happening though!! 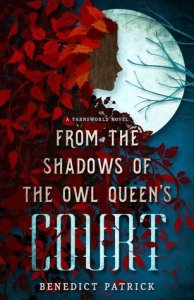 I really love me some Yarnsworld. The types of books that you can just sit down for an afternoon and take in one entire story. For me, Yarnsworld only keeps getting better and better, and this one has overtaken Those Brave Foolish Souls as my favorite in the series!

I had feels about this book. It legitimately made me cringe at times (‘oh god don’t put that in your mouuuttthhhh’), and smile at other times. I loved the character of Nascha, and rooted for her to win the day, and legitimately emoted for her at times. I also really liked Bradan, and felt for him while he struggled with having a powerful but mad father who nobody really wanted around anymore. There is no Magpie King anymore, they say. Everyone, including the Magpie King himself. 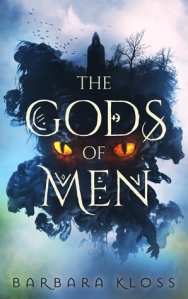 When I agreed to help #TeamWeatherwax judge in the Self Published Fantasy Blog-Off this year, I honestly didn’t expect one of my top ten books of the entire year to be among our pile. But, here we are! 😀

This one was so well written and edited right out the gate that I read a huge chunk of it in one sitting, and then another huge chunk of it in the next sitting. It was an incredibly hard book to put down, and I highlighted many, many quotes, as generally happens with books I am really enjoying. It was never boring, and I always wanted to make time to read it.

I really loved Sable’s character, and Jeric’s as well. There was a romance that I was not expecting to root for but ended up rooting for. I love when that happens!

#8 – Priest of Bones by Peter McLean

This one had been on my radar for a good long while before I managed to snag a NetGalley of it, and boy, was the palpable hype about it well earned! ‘Peaky Blinders with Swords’ isn’t a bad description here, lol.

This book occasionally talks about some difficult subjects, and man, it got me right in the feels at times. Unexpectedly so. I wasn’t expecting to get overly emotional while reading a book that was more or less about a street gang. But here we are.

Tomas Piety is an easy character to root for, even if he definitely isn’t necessarily a good man. He’s not inherently a bad dude, but he’ll do whatever is necessary to reach his goals. He’s morally grey, I suppose. He is often snarky, and often rather dangerous, and when he finds himself in a position where he can’t give an inch without losing face, he will not give an inch.

#7 – The Tower of Living and Dying by Anna Smith-Spark 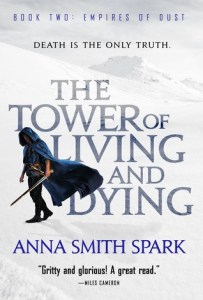 Having really enjoyed The Court of Broken Knives last year, this one was of course on my TBR list, and daaaamn it was one of those books that I just took into my reading room and didn’t come out again until it was done.

Daaaamn is it grim though. The Queen of Grimdark strikes again for sure. The last quarter of this book had me on the edge of my seat, and I stayed up extra late to read it to the end. I brought it into the bath with me and was so immersed that the hubbo came in to make sure I hadn’t drowned, lol. I normally wouldn’t devour a book like this in days, because I generally have to take breaks in books that are really violent or gory… and this one is both of those things… but it’s written in a way that I almost didn’t notice. Allllmost. 😀

Oooh Tali. One of those characters that I can’t help but root for even when she does STUPID THINGS.

I love love love a book with some well paced, well thought out, and believable romantic tension between characters in it, and this one is chock full. The tension between Talyien and her potential romances was really well done, and my poor feels got suitably jostled (in a good way… sort of?) quite a few times just on that aspect of the book. Gods above and below, Tali. What. The. Actual? The last quarter of this thing was a rollercoaster of emotions.

It was such an incredibly hard book to put down, and as such I would consider it a really great sequel. I think a sequel really great when I like it even better than the first book in the series. This one did that! It also has such intricately described food – I found myself making all kinds of snacks throughout as all these tasty sounding foods were described. 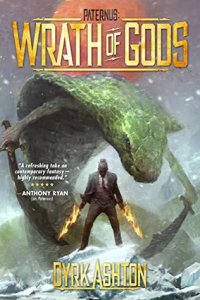 Oh Paternus, you giant mythological smoothie of amazingness. This volume brings back most of the characters I loved from the first, Kabir, Edgar, Mrs. Mirskaya, and my favorite giant ridiculous dog, Molossus. This one introduced new characters who I latched right onto. We’re introduced to Freyja, who is a fantastic character that I immediately loved. We also see more of Myrddin Wyllt, who is basically hilarious Merlin if he was a doddering old man who’s just learning how to text, Baphomet the mischievous Goat, who is… who and what he is, and Cù Sith, who is trying very hard to prove himself to be more than the sum of his parts.

I thought there would be less mythological shit to squee over in this volume because there was so much in the last volume, but this one made me geek out just as hard. Figuring out who everyone mythologically *is* is really just fun as hell for me. There aren’t as many Firstborn as there were gods in all the mythologies of the world, so many of them take on more than one role, and my guessing all of them with varying amounts of success is actually more fun for me than I’m sure I make it sound.

Okay, truly I really mean the entire Heartstrikers series by this one, but this one was the only one published this year, so we’ll call it this one.

This one may have just crossed my path at a really good time, but I started the first book one lovely day and before I knew it I had consumed all 5 of these audiobooks like it was nothing.

Julius and Marci are fantastic characters to cheer for, but Julius’ family, the titular Heartstrikers, are often hilarious. Brohomir (or Bob, as he likes to be known ^_^) is one of my favorite Urban Fantasy characters of all time at this point.

Vikas Adam gave this entire series some incredible narration, and I think that, possibly more than the fantastic story itself was what lead to me consuming the entire thing in a row. Love. Lovelovelove.

#3 – King of Assassins by RJ Barker 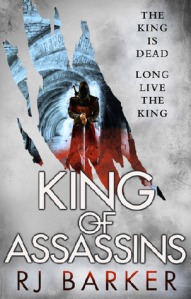 This one was one of those books that was very difficult to put down. Each volume of the series has its own mystery within. They all add to the overall story of the entire trilogy, but each book resolves its own mystery by the end, and this one was no exception. I was only 20% or so in and I had to pry the damn book out of my own hands to make dinner. All kinds of stuff happens that keeps this one a fantastic read from beginning to end.

This particular volume is also the darkest of the three books. There are events that happen is this volume that certainly seemed darker or… perhaps more gruesome than in previous installments, and I say that even knowing that this is a story about assassins. Things are coming to light in this one that… well they aren’t great, but they certainly kept me on the edge of my seat! 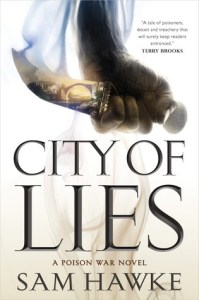 This is another book that was on my radar for a good while before I managed to get it into my system, but once I did, hooboy. I started listening to it and couldn’t stop myself until it was done. While I didn’t have a ton of time for audiobooks, I made time for this one.

Jovan and Kalina, who tell this story in alternating first person views, were both characters that I rooted for, and very very interesting to me. Interesting in that both characters are disabled in their own way, one physically and the other mentally, but they are never portrayed as less than anyone else because of their illnesses.

I really quite enjoyed trying to figure out who the baddie was, and found myself completely in the dark about it throughout the entire thing, which was great. It makes twists and turns that threw me off the scent, and revealed clues that seemed important that turned out to be unimportant and vice versa. By the end of this book, I had suspected pretty much everyone except Jovan and Kalina, and I mean everyone, lol. The last few hours of this thing were a total thrillride of wondering what was going to happen and if things that happened were really for realsies happening. My feeeeeels!

You can see my review here! This one got 5/5 horrible deadly poisons! ☠️☠️☠️☠️☠️

I’m quite sure this one was expected by most people know know me even a little bit. Just as Kings of the Wyld was, this book was one of those books that I absolutely loved every second of, and my review, which was really just me squeeing at the screen for 20 minutes or so, kind of reflects that a little. 😀

There are a thousand reasons that I loved this book. It is amazingly well put together, and well written. It’s funny as hell and it makes me laugh, yes, but it also has serious moments. Some of those moments got me in the feels pretty good too. The characters became friends of mine, in a way. I really liked Tam as a character, and I liked the journey that the band made, but the real star here, for me, was Freecloud. After Lastleaf, I don’t know what I was expecting from a druin, but I don’t think it was this. I wanted all the good things for him because he deserves good things. He’s just a good dude, full stop. He’s got the prescience, the grace (usually), and sometimes the sort of… otherworldly agelessness that druin do, but at the same time he’s so down to earth and easy to talk to.

Kings of the Wyld felt like it was representing all the greatest classic rock bands of the 70s. But Fable, their manager, their groupies, and their afterparties definitely reminded me of the brightly colored, platinum-blonde, sometimes utterly ridiculous 80s. And since I was born and spent a good deal of my formative years within the 80s…. I FUCKING LIVED FOR IT. <3<3<3