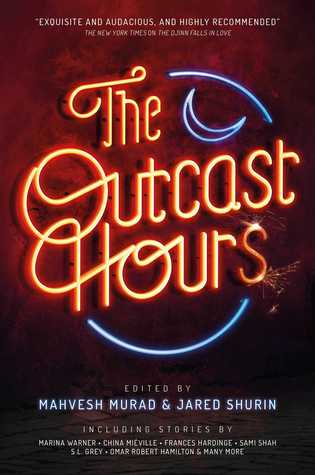 Having really enjoyed The Djinn Falls in Love, I couldn’t help but request this one as soon as I saw it on NetGalley!

So thanks very much to the authors, and editors, and Solaris via NetGalley for the review copy!

We live our lives in the daylight. Our stories take place under the sun: bright, clear, unafraid.

This is not a book of those stories.

These are the stories of people who live at night; under neon and starlight, and never the light of day.

These are the stories of poets and police; writers and waiters; gamers and goddesses; tourists and traders; the hidden and the forbidden; the lonely and the lovers.

One of the commonalities of human existence – something we all share – is the fundamental, inescapable presence of time. Night comes for us all: wherever we are, whoever we are, however we delay it – or, indeed, embrace it – there is an inevitability to the darkness that has framed the entirety of human existence.

Oh anthologies. They are often hit or miss with me, sometimes I love all the stories and sometimes only some. But anthologies are wonderful reads for in-between other books.

This anthology has the theme of the night. Or, perhaps people who are generally at their best at night. I can certainly relate with that! I am one hundred and fifty thousand percent at my best at nighttime. So, of course, I couldn’t resist this one.

I’ll admit that I picked it up mostly for China Miéville’s name being on it, as I love his work. He has 9 ‘microstories’ in this one, that are sort of peppered throughout the book in between chapters. If I’m honest, these were more confusing than anything because with them being only a page or two long and with no real context or titles or anything, they seemed like remnants, almost. They were, however, very well written all the same, but I was still a little iffy on them… but I did find a whole bunch of stories in here that I ended up really liking!! I like how this anthology brings together a bunch of ideas from people of different cultures or backgrounds to tell stories on a similar topic.

Here’s a bit of a close up on some of my favorites!

This Book Will Find You by Sam Beckbessinger, Lauren Beukes, & Dale Halvorsen
This story is about a girl named Kara who finds a book on how to raise a dead lover just in time for having to actually raise a dead lover. It was from the point of view of Kara herself, which was an interesting way of seeing a ritual intended to raise the dead. I thought it was quite well written and interesting, and it took some really interesting and unexpected turns. I was engrossed from start to finish.

Ambulance Service by Sami Shah
The story of Nazeem, who is an ambulance driver in Karachi, and his apprentice Bilal. What made this story interesting is that the calls that they respond to make them more like exorcists than paramedics (though, really they’re something like both). Fantastically written and had me hooked from the very beginning.

Bag Man by Lavie Tidhar
The story of a man named Max in Tel Aviv who is a transporter. He is taking a briefcase from point A to point B when he is robbed of it by a group of thugs, which starts a pretty epic adventure of trying to get that briefcase back. A quick, exciting read!

Gatsby by Maha Khan Phillips
This one was a really enthralling story about a woman in Karachi named Ra who gets invited to a Gatsby themed party at the estate of a wealthy financier who is new in town. And some real shenanigans go down. This one was so hard to put down once it got going. Great stuff!

Swipe Left by Daniel Polansky
A story about a dude named Matt who goes on a Tinder date and it goes… pretty much like a first date goes… until it really, really doesn’t. A short and quite engaging read that had some twists that I wasn’t expecting.

The Patron Saint of Night Puppers by Indrapramit Das
This is the story of a chubby white Canadian gal named Kris who works the night shift at a doggy hotel. Now… as a chubby white Canadian gal named Kristen who in fact loves her some freakin’ puppos, you can imagine I found it rather easy to relate to the main character here… and you’d be right. 🙂

The Dental Gig by S. L. Grey
Frankie Bell has mouths to feed, and works very hard doing what she does, which is very careful extracting teeth from under the pillows of children. Yep, she’s a tooth fairy, and one who works for a rather strict company. This was a wonderfully unique story and I wished it was even longer!

Dark Matters by Cecilia Ekbäck
This is the story of an eight year old Swedish girl named Irma whose father dies an awful lot. Recently, Death has come to live with them, as has Resurrection, and Irma just seems to take it in stride. Interesting story with an interesting twist!

The Night Mountain by Jeffrey Alan Love
This is the story of a man who takes a journey with his wife and son up a mountain that lives in the night. They are urged to do so by his wife’s brother, a beast-faced man. The man telling the story isn’t that surprised about that part, given how he met his wife. This tale was one of magic and it left me curious for more, and yet satisfied with the end.

The Partial Beginner’s Guide to the Lucy Temerlin Home for Broken Shapeshifters by Kuzhali Manickhavel
This reads like exactly what it sounds like. Rule one: avoid corridors infested with thunderstorms. The thunderstorms aren’t there for research purposes, they’re there because we don’t know how to get rid of them. This was a neat story and it had me laughing more than once. This was my favorite story of the bunch!

All told, I really liked this one! More stories that I liked than didn’t like. Truth be told, I didn’t dislike any of them, though I found one or two of them to just not be for me, but that’s bound to be true of just about any anthology that there is. I had 4/5 stars of fun  here!

One thought on “Review: The Outcast Hours – Edited by Mahvesh Murad & Jared Shurin”