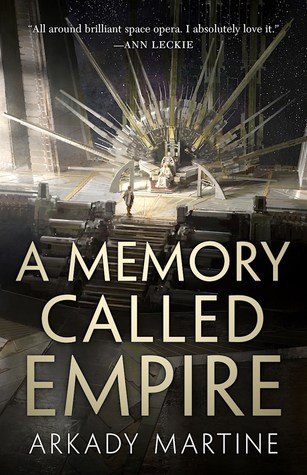 This book came to my attention through social media, and it sounded really interesting. So, when it popped up on NetGalley, I couldn’t help but jump all over that request button.

So, many thanks to the author, as well as Tor via NetGalley for the review copy.

Ambassador Mahit Dzmare arrives in the center of the multi-system Teixcalaanli Empire only to discover that her predecessor, the previous ambassador from their small but fiercely independent mining Station, has died. But no one will admit that his death wasn’t an accident–or that Mahit might be next to die, during a time of political instability in the highest echelons of the imperial court.

Now, Mahit must discover who is behind the murder, rescue herself, and save her Station from Teixcalaan’s unceasing expansion–all while navigating an alien culture that is all too seductive, engaging in intrigues of her own, and hiding a deadly technological secret–one that might spell the end of her Station and her way of life–or rescue it from annihilation.

This book follows the adventures of Mahit, who is a young woman who is chosen to replace the Ambassador of their Station in the Teixcalaan Empire. Her predecessor died unexpectedly, and so she wasn’t given all the preparation that she could have had, and gets sent almost immediately.

You see, what the Empire doesn’t know is that people from the Lsel Station have some forbidden neurological implants. They have the memories and personality of their predecessor implanted in their brain as preparation for this sort of thing, somewhat as an AI. Another personality that they meld with over time. While Mahit does have the memories of the prior Teixcalaan Ambassador, Yskandr in her head… he’s about fifteen years out of date.

And when they arrive and face his corpse, he disappears from her brainspace entirely.

So she is left to navigate the often-complicated Teixcalaan culture with only her Teixcaalanli liaison to help, while simultaneously figuring out who almost-certainly-murdered the previous Ambassador, and preventing the ever-expanding Teixcalaan Empire from moving right in to the Lsel Station.

I really liked Mahit as a character, and I thought she was easy to root for. She’s a little foul-mouthed (internally, anyway), a little sarcastic, and a little snarky at times, and those are three things are what I liked the most about her. I didn’t know what I could expect from the Teixcalaan characters, because this story starts out thrusting you into this sort of imperial culture which is quite different from anything I’ve ever known, and I expected they were going to be very uppity and stodgy, considering that most of their culture is rooted around poetry and verse. That said, I ended up really liking a few of the Teixcalaan characters, most notably Three Seagrass, her liaison, and Twelve Azalea, her courtier friend. Reed and Petal. Twelve Azalea especially was all of the foul-mouthed, flagrantly rebellious sidekick that I could hope for.

The mystery that unfolds during this story was also really well plotted out. The intrigue that comes from the imperial court of a very, very large empire blended into the mystery and the story quite well. This was a wonderfully unique idea, and the Teixcalaan culture was very well thought out and executed well. There were twists and turns that I didn’t at all see coming, and I had some feels at times that I wasn’t expecting either. I thought in the very beginning that I might have bitten off more than I could chew and that it was going to be confusing with all the number/noun names and verse and what have you but it wasn’t at all confusing, and I quite liked how easy it was to read while still having some lovely prose and imagery.

And so, I went into this book expecting a really hard sci-fi space opera that I was going to like… but have to work a bit to like (in a I-have-to-pay-attention-to-details sort of way, to be clear that this is not a detriment, lol), and what I got was a really interesting story that was easy to read, and easy to like, with characters that were also easy to like. It gave me a vaguely Foundation-like vibe at times, while still being modern-feeling and fun.

I had a definite 4/5 stars worth of fun with this book. I’m excited to see where this story goes!

Thanks again to Tor via NetGalley for the review copy!