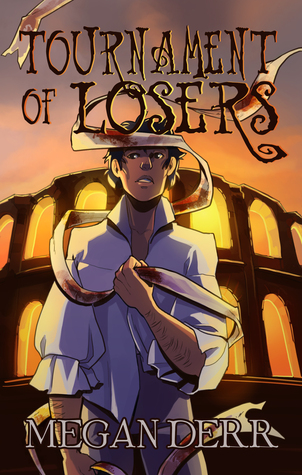 All Rath wants is a quiet, peaceful life. Unfortunately, his father brings him too much trouble—and too many debts to pay—for that to ever be possible. When the local crime lord drags Rath out of bed and tells him he has three days to pay his father’s latest debt, Rath doesn’t know what to do. There’s no way to come up with so much money in so little time.

Then a friend poses an idea just ridiculous enough to work: enter the Tournament of Losers, where every seventy-five years, peasants compete for the chance to marry into the noble and royal houses. All competitors are given a stipend to live on for the duration of the tournament—funds enough to cover his father’s debt.

All he has to do is win the first few rounds, collect his stipend, and then it’s back to trying to live a quiet life…

“You know nothing about me or my motives.”

“You’re right. I know nothing about you, but you know where I live, where I drink, where to find me whenever it strikes your fancy to do so. I’m completely at your mercy, my lord. That will never change throughout all the time we spend together. And frankly, I don’t want to keep wasting my limited free time on a man who’s eventually going to toss me aside and forget all about me.”

This. Book. Was. So. Fucking. Adorable!

This is the story of Rath, who is a general laborer and sometimes whore living in the poorer side of the city. When a loan shark comes calling on him to pay back a truly absurd sum of money that his deadbeat father owes, Rath tries his best to come up with as much of the money as he can, when a friend of his comes up with an idea… he can enter the Tournament of Losers – not its real name, of course, but as far as Rath cares for it, it’s pretty accurate. The idea is that the nobility of the realm holds a tournament every set number of years in order to marry off some of the nobles to common blood in order to mix things up a bit. Rath thinks it’s rigged, either way, as some of the people who enter train for winning the tournament from a very young age.

It’s somewhat like the Hunger Games in that respect, only there’s less death and these people are anywhere between the ages of 20 and 40, and not, like… teenagers killing each other.

Rath enters the tournament, and ends up doing well enough to pay off his debts. Then he plans on losing so that he doesn’t have to keep competing for no reason, but keeps on going anyway, despite his life being threatened a few times. Meanwhile, he and a…. ehhhhhh…. we’ll go with mysterious (not very mysterious) nobleman named Tress have started a relationship which Rath is regretting and yet so not regretting more and more as it goes on.

It’s obvious from the beginning of the tournament who Tress really is, but I couldn’t have cared less, because I still needed the story leading up to the happily ever after here. This story wasn’t about the ending for me, it was about the getting there. Tress is an adorable character who just wants to spoil his lover and make him feel better, and I wanted all of the goodness for him. Rath is a character who was very, very easy to root for, and so my heart of hearts wanted nothing more for a happily ever after for the both of them.

Admittedly I’ve spent the last couple months reading stuff that is far steamier than this one. All of the sex in this one is behind closed doors, but regardless, it was still full of the feels, even if it wasn’t as full of the touchy-feels, so to speak. 😀

This is an adorable, slow burn, fun and often funny novel with a romance between two characters who I wanted to see reach the end of this story happy. It was fast paced, it took me an afternoon to read, and I was enthralled from beginning to end. An easy 4.5/5 stars from me!~