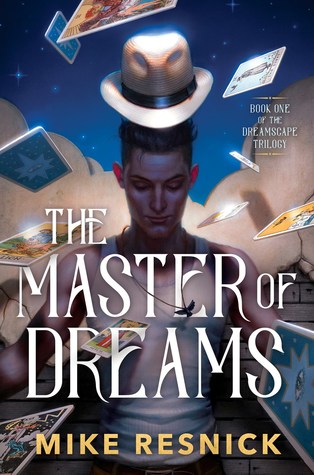 Alright, I will admit that the cover is the thing that sucked me in on this one. I just can’t resist a Dan dos Santos cover. 😀

Thanks to the author as well as Berkley via NetGalley for the review copy.

Eddie Raven isn’t quite sure what’s happening to him–and he’s in a race to find out before it kills him.

His adventures begin with a shooting in a very strange shop in Manhattan–but soon he finds himself the owner of a very familiar bar in Casablanca. By the time he adjusts to that reality, he’s suddenly become one of several undersized people helping a young woman search for a wizard. And after confronting the wizard, he somehow finds himself in Camelot.

But as he rushes to solve the mystery of his many appearances, a larger threat looms. Because someone or something is stalking him through time and space with deadly intent….

“You can be an incredibly bothersome man to speak with, do you know that?” said Peugeot irritably.

“It’s been suggested a few times.”

This is the story of Eddie Raven, who is a regular dude shopping in Manhattan with his regular girlfriend Lisa when they decide to get their fortunes read. Suddenly, and inexplicably, they get shot at by a random gunman, with a stranger taking a bullet for Eddie, and the girlfriend and the fortune teller getting shot. Eddie rushes to the hospital to see if she survived only to learn that there was no woman reported, and no woman came in with the stranger and the fortune teller. Strange!

He soon finds himself in his nightclub in Casablanca, which is familiar to him, but also very strange. Lisa shows up with no recognition for him, and says her name is Ilsa (this is Casablanca after all – characters named after cars appear as well, only instead of Renault and Ferrari, we have Peugeot and Maserati). He does seem to recognize that it is his club, and he knows the names of several of the regulars and knows his way around. He’s tasked with finding some traveling papers in the club somewhere before noon or else he’s stuck there forever.

When he does find them, he finds himself in Oz, and after further adventures there with Dorothy and the gang, he finds himself in Camelot. All the while, the stranger  who saved his life is talking in his head, telling him that the Master of Dreams is coming for him. Shenanigans are abound!

This was a pretty quick read. It’s easily consumed in a day if you stick with it, and it is fairly fast paced. I found it a bit confusing from time to time, as it can be very strange sometimes, as you can imagine. It doesn’t necessarily help that we’re just sort of dumped into this one with no real explanation of what’s going on, either. However, with that said, Eddie is also thrown into this world with no real clue what’s going on either, so there is that. We’re not the only ones who have no real idea what’s happening here. We find out the details as he does.

Sometimes Eddie made my eyes roll. For instance, the story begins with Eddie and Lisa shopping on 5th avenue in New York, but one of the first things Eddie does is lament that women don’t wear skirts anymore. This immediately made me assume that this book takes place in perhaps the 1960s, as this seems a very archaic thing for a modern 20-something to say, and isn’t the only time he uses language that seems old-fashioned for seemingly no reason whatsoever. But then suddenly we were talking about DVDs and tablets and I was like… oh… this takes place in the present…. well then, uh… uh. It honestly low-key made me wonder the entire time I was reading if he was secretly a time traveler from the 50s or something because it seemed really out of place for a modern day 20-something from New York.

So, I had a bit of a rocky start with it, as you can imagine, but I stuck with it, as the premise was interesting. And in the end, I’m not sorry that I stuck with it, because when Eddie made it to Camelot, I found myself liking the story more. I don’t know if it’s just that I’m a sucker for Arthurian stories or what, but Eddie-as-Mordred wandering through Camelot trying to make friends with the Knights of the Round Table and trying to find Guinevere had me more into the story than anything up to that point.

So, all told, it was a fast-paced romp through a few fictional worlds that gets better as it goes, but still has a few parts that made my eyes roll in it. I didn’t end up loving it, but I did end up liking it a lot more than I anticipated I would after the first few chapters. I’d say I had a solid 3/5 stars of fun with this one, in the end.