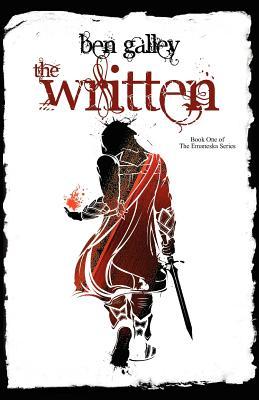 This is my first blog tour ever guys, so forgive me if I don’t do this right! 😀

When I was approached to participate, I couldn’t help but jump on the chance. I’ve been meaning to read more of Ben Galley’s work for quite a while, and what better time to start the Emaneska series than a blog tour?

So, thanks to Ben Galley and The Write Reads for the opportunity.

A spellbook has gone missing from the libraries of Arfell – a very old and extremely powerful spellbook from the time of dark elves and demons. Five scholars are dead, the magick council is running out of time and options, and the Arka is once again on the brink of war with the Siren dragon-riders.

It falls to Farden the Written mage to keep the world from falling into chaos. Entangled in a web of lies and politics, Farden must recover the spellbook before an ancient enemy rises, even if it takes journeying halfway across icy Emaneska and back.

In his fight for answers, Farden will unearth a secret that not only shakes the foundations of his world, but threaten the entire future of Emaneska. Sorcery, death, drugs and the deepest of betrayals await.

‘Cheska, this is serious…’ began Farden, but Cheska shook her head defiantly.

‘Don’t even start with that vulnerable woman shit.’

This is the story of Farden, who is one of the Written. The Written are mages on whom a Book of magic is tattooed. Spells so powerful, that to read them drives people mad, which is why they are tattooed on the back and the shoulders of the mage.

A very, very powerful and dangerous spellbook has been stolen, and it is up to Farden to find it. He travels to the snowy north, where the long time enemy of the Arka (his people), the Sirens reside. With their dragons. A dragon’s memory book may be the only thing with a clue where this book could have ended up.

And so he goes to see what he can find out. And shenanigans ensue. Magical shenanigans. With dragons.

This was an interesting book, to be sure. The world in which Farden lives includes magic and dragons, but at the same time it also includes vampires (who are at least partially accepted in society) and werewolves (who are not).

He held his hands out in front of him, curled fingers forming a cage around nothing but air. Then, a spark ignited and a spinning sphere of fire bloomed between his palms. The wider he held his hands, the bigger it grew, until it raged and spat like a trapped sun. With a swift movement, Farden spun on one foot and hurled the fireball straight at Eyrum, who stood dead still about forty paces from him.

It wasn’t my favorite book by Galley, but it was certainly entertaining enough to read well into the wee hours of the night at times. Farden’s adventures were at times a little slow, but still exciting enough that I was immersed in it pretty well from start to finish. Overall I did really enjoy Farden as a character, and I soon hope to explore a little more thoroughly into Emaneska to see what other shenanigans he gets up to. 4/5 stars!~