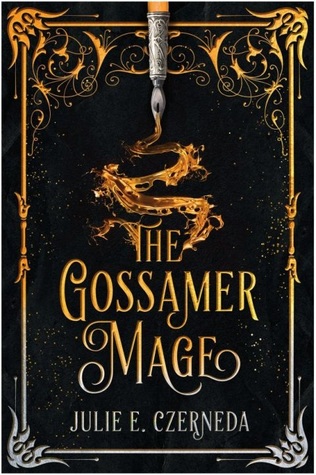 I stumbled over this one on NetGalley while I was looking for something else, which… happens more than you’d think. In usually good ways! ^_^

So, thanks to the author, as well as DAW via NetGalley for the review copy!~

Only in Tananen do people worship a single deity: the Deathless Goddess. Only in this small, forbidden realm are there those haunted by words of no language known to woman or man. The words are Her Gift, and they summon magic.

Mage scribes learn to write Her words as intentions: spells to make beasts or plants, designed to any purpose. If an intention is flawed, what the mage creates is a gossamer: a magical creature as wild and free as it is costly for the mage.

For Her Gift comes at a steep price. Each successful intention ages a mage until they dare no more. But her magic demands to be used; the Deathless Goddess will take her fee, and mages will die.

To end this terrible toll, the greatest mage in Tananen vows to find and destroy Her. He has yet to learn She is all that protects Tananen from what waits outside. And all that keeps magic alive.

Guided by a mage scribe’s intention, magic could change what lived. Or it could produce something that had never lived, modeled on what did. And, every so often, guided by imagination and will, an exceptional intention could create something never before seen.

This tale has a very interesting premise, to be sure! In this world, the Deathless Goddess has gifted some people with the ability to magically write specially designed things into being, in exchange for aging prematurely – if their intention holds up with what they’re trying to make. If that intention is flawed, they’ll make a gossamer – a creature, sometimes strange, and usually quite harmless, but uncontrollable. Wonderous, at the least.

Sick of the premature aging aspect of magic, the mage scribe Maleonariel decides that he is going to find the Deathless Goddess and end her. But, the Deathless Goddess isn’t the only being on the scene. Something (or somethingssss) evil is lurking in Tiler’s Hold, and they might be after the goddess herself.

This was a very well written book! I loved the prose. The story flowed really well, and this book was quite easy to read, in that it was never too difficult to either read it in large spurts, or littler bits in between spurts of working. I sometimes found that the story wasn’t capturing my attention all the way, but by the middle of the story, that seemed to have stopped happening, as I was more immersed with it. By the end, I liked this book a lot.

We see this tale from several points of view. Firstly, there is of course Maleonarial, who is a mage who has lived alone and isolated for twelve years. We also see the story from the point of view of Kait, who is one of the Daughters (of the goddess. It’s metaphorical). She can hear the goddess’s words. Men can write them but not understand them. Women can understand them but not write them. We also see some of the story from the POV of Pylon, who is a kind of noblewoman from the hold in which the evil shenanigans are going down.

The only part of it that really kind of blocked me from enjoying my time with it more than I did was that some characters have very heavy accents that are very apparent in their dialogue. Now, this might be just a nitpick on my part, but what is, I’m sure, intentionally meant to be an immersive use of language was the opposite for me. Totally broke my immersion because I would stumble over words that were all shoved together with apostrophes. C’est la vie, I suppose!~

But, all told, in the end I liked this book quite a lot! The prose, and the way that the whole thing ended up really won me over. So, I can definitely say I had 4/5 stars of a good time with this one. I think that some people will like it more than others, but I’d certainly recommend it to anyone who likes the idea of magic via writing.

One thought on “Review: The Gossamer Mage by Julie E. Czerneda”