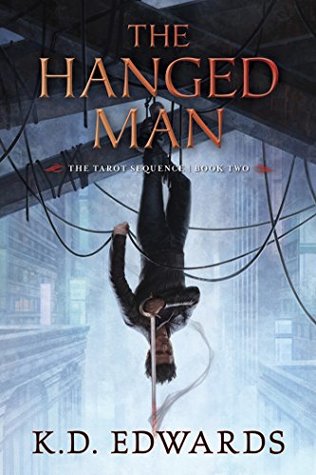 Warning! Squees ahead. Many squees. So many, many squees.

Also, this review is based on a review copy. Thanks to Pyr and the author for the review copy.

The last member of a murdered House tries to protect his ward from forced marriage to a monster while uncovering clues to his own past.

The Tarot Sequence imagines a modern-day Atlantis off the coast of Massachusetts, governed by powerful Courts based on the traditional Tarot deck.

Rune Saint John, last child of the fallen Sun Throne, is backed into a fight of high court magic and political appetites in a desperate bid to protect his ward, Max, from a forced marital alliance with the Hanged Man.

Rune’s resistance will take him to the island’s dankest corners, including a red light district made of moored ghost ships; a surreal skyscraper farm; and the floor of the ruling Convocation, where a gathering of Arcana will change Rune’s life forever.

My name is Rune Saint John. I am, before anything else, a survivor: of a fallen house, of a brutal assault, of violent allies and complacent enemies, of life among a people who turned their back on me decades ago. Among those who matter I am known and notorious. I am the Catamite Prince; the Day Prince; the Prince of Ruin. I am the last scion of my dead father’s dead court, once called the Sun Throne, brightest of all Arcana, now just so much ash and rubble.

So, let me preface this review with: this is, within a day, easily my favorite book of the year. Out of 150 (so far). I mean… no offense, other books, but you really can’t beat Rune and Brand. Or Rune and Addam. Or… well, you get the idea.

This is the continuing story of Rune Saint John, the last scion of the ruined Sun Throne. Rune is Atlantean (yep, that Atlantis). With their home destroyed in a war with humans, Atlanteans now call New Atlantis home. New Atlantis is located on the island of Nantucket, off the coast of Massachusetts, under accords with the American government. They have magically displaced abandoned buildings and sunken ships and such from around the world, and created their own land, ruled over by the Arcana: powerful and nearly god-like Atlanteans with a host of magical powers and a shitton of money. At least… most of the Arcana are super rich and powerful. There are exceptions. The court of the Lovers was brought down for corruption, the court of the Emperor died in the war that destroyed Atlantis, and the Sun court hasn’t recovered from a brutal and mysterious assault on them years before. Rune and his Companion Brand are the last of their house, unable to even enter the Sun Estate without a host of angry undead creatures attacking. So, they do what they can with what they have… which is admittedly not a lot.

“If this is what the Tower calls poor, we need to invite him over to Half House for a fucking sleepover. He can sleep on the floor, between the broken washing machine and the milk crates I use for shelves.”

Rune’s ward, Matthias ‘Max’ Saint Valentine was entered into a marriage contract with the Hanged Man by his grandmother Lady Lovers before the ruin of her court. Now that he is a ward of the Sun Throne, and under their protection, it’s up to Rune and Brand to stop the Hanged Man from coming to collect on that contract. And the Hanged Man really, really wants to come and collect on that debt. It’ll take every magical shenanigan Rune knows, every combat skill Brand has, and a lotta bit of help from their friends to stop him.

This book was phenomenally written, and it gave me the entire gamut of emotions throughout its course. This is one of those books where I come for the characters but stay for the action. I love the characters in this series. Brand and Rune have one of the best relationships ever. Brand is Rune’s Companion, which is somewhat like a bodyguard, but one that has been bonded to you since infancy. So, they are more than best friends and more than brothers. They rarely fight in earnest, but it occasionally happens. I was in tears for the two of them more than once, and yet laughing for most of the book. The Banter between them is the stuff of legends. In fact, I think I came to the realization at some point during this book that Brandon Saint John may well be my favorite literary character ever. Everyone needs a Brand. The fucking snark that comes out of this guy’s mouth, my dudes. I have like 1/4 of the dialogue in this book highlighted because it’s Brand being a hilarious asshole, and I was here for it, and will continue to be here for it.

“Rune, so help me, if you don’t stop thinking about fishing that piece of toast out of the trash, I will punch you in the eye.”

“I just don’t understand why you needed to throw it away,” I complained. “And while we’re on the subject, have you noticed how much stronger our Companion bond is getting? I’m not used to you reading my mind this well.”

“I don’t need telepathy to guess what you’re like before you have coffee. Sit the fuck down and get your shit together.”

My other favorite relationship is that of Rune and his boyfriend Addam. Being the son of Lady Justice, and a scion of another court, it is not always politically favorable for Addam to get involved in Rune’s shenanigans, especially if it involves pissing off another court. Addam and his brother Quinn are friends of Rune, Max, and Brand though, and they don’t let something like house politics stop them from helping their friends. Especially Quinn, who is both Max’s best friend, and a prophet, constantly seeing the future in probabilities. Addam does spend a lot of time worrying over Quinn, but he is also there for Rune when he needs him, even as Rune feels guilty for getting them roped into his trouble. He is a very patient lover too, as Rune is understandably triggered at times by physical intimacy. Addam never complains, he never pushes, and he always understands, and he lets Rune go at his own pace. I was in tears for them too. Most adorable couple ever. Relationship goals.

The masculinity in Rune’s circle is more non-toxic than Elmer’s glue, which is admittedly rather unexpected in fantasy in general in my experience, and I honestly find it heartwarming AF. Rune can literally set things on fire (including himself). He can incinerate a horde of zombies if motivated enough. Brand is trained in like 108 different martial arts and usually has at least 10 weapons hidden upon his person. They still hugged it out and talked about their feelings, because that is what needed to happen. It’s what they do.

This series is not scared to take your emotions and kick them in the fucking face. K.D. Edwards presents a world much like ours, where horrible things happen. There are characters who suffer rape, child abuse, torture, and other awful, awful things. As much as I will squee about how adorable this series is, it is set in a world in which very bad things happen to good people. That said, this is also a book in which there is love, and support, and hope for the future. That’s why it makes me smile as much as it makes me cry. It presents me with characters so endearing that I can’t help but want the very best for them, gives them backstories or puts them in situations that smush the fuck out of my emotions, and then rounds it all out by having other characters be there for them; ready and willing to love and support them, snark and all.

If I could give this book all of the stars in the night sky, I would do it. That’s how special it was to me. ♾️/5 stars.

2 thoughts on “Review: The Hanged Man by K.D. Edwards”