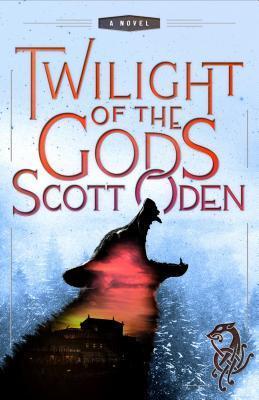 I really quite enjoyed A Gathering of Ravens, and so when this popped up on NetGalley, I couldn’t pass up requesting it.

So, many thanks to the author, as well as St. Martin’s Press via NetGalley for the review copy!

It is the year of Our Lord 1218 and in the land of the Raven-Geats, the Old Ways reach deep. And while the Geats pay a tax to the King in the name of the White Christ, their hearts and souls belong to the gods of Ásgarðr. But no man can serve two masters.

Pledging to burn this Norse heresy from the land, famed crusader Konráðr the White leads a host against the Raven-Geats, using torch and sword to bring forth the light of the new religion. But the land of the Raven-Geats has an ancient protector: Grimnir, the last in a long line of monsters left to plague Miðgarðr. And he will stand between the Raven-Geats and their destruction.

Aided by an army of berserkers led by their pale queen, Grimnir sparks off an epic struggle –not only against the crusaders, but against the very Gods. For there is something buried beneath the land of the Raven-Geats that Odin wants, something best left undisturbed. Something the blood of the slain, Christian and pagan, will surely awaken.

This is the continuing story of Grimnir, who is the last of the kaunar, a skraelingr (he’s basically an orc) who has wandered the land for something like twelve hundred years. He’s currently living somewhat isolated among the Raven-Geats – a clan of people who, despite Christianity taking over much of the land, still worship the old gods of Asgard. That, and they have a sacred protector (guess who?!) they know as The Hooded One, who they give offerings and so on in return for him protecting their village. They have chosen a woman named Dísa as the priestess of the Hooded One after the old one dies. She’s pretty surprised when she meets him (as you would be), but they end up getting on pretty well. He even teaches her to fight. Just in time for her to need to, really.

This takes place in the land of the aforementioned Raven-Geats, which is described as on the northern bank of Vänern lake (currently southern Sweden) in 1218. The Geats pay taxes to the king in the name of the ‘Nailed God’ or ‘White Christ’, but that’s not really going to cut it anymore. A crusader named Konráðr is coming to stamp out their heresy and retrieve a holy relic that he has been told is in their lands.

Well, the clan’s protector and his mouthy warrior priestess are hardly going to let that happen, amirite? A clan of berserkers are also after this relic, having been told that it is an item of their kinsman’s, and are willing to help the Geats fight off the crusaders if they can have it instead.

I enjoyed this one. It gets pretty grim at times, as you’d imagine that a book focusing a lot on a holy crusade would. Grimnir isn’t exactly an antihero, though he is usually grumpy and unpleasant to be around. He’s often snarky, and I do like that about him, and I enjoyed this one a lot because Dísa doesn’t just suck that snark up and move on. She will give almost as much as she’s given, usually, and so I liked the dynamic between them.

“I thought you were someone else.”

“Did you now?” Grimnir snorted. “Who else but you would be fool enough to wander up to the fences of my lands uninvited? Are they here now? Call them out, so I might peel the wretched skin from their bones and hang it on a bramble!”

Dísa cursed under her breath.

“I said: does everyone have an oar up their ass, this day?”

I also enjoyed the fact that Dísa never depended on Grimnir to save her butt when it was on the line. He taught her what she needed to know to defend herself and then let her do it.

It was well written and read quickly. The plot flowed well, and although there were some slower parts in the beginning before things really got going, I still found the plot engaging and the book hard to set aside to do other things, like sleep!

It felt, if not exactly historically accurate (with there being all sorts of gods and monsters and what have you present), then definitely true to the spirit of a book that takes place in 13th century Scandinavia….. with the addition of all the gods and monsters and an orc main character. The only bit that I had a bit of trouble with is that the point of view changes from person to person at times from one paragraph to another. I can handle multiple points of view alright but this got a little confusing at times when two characters would be fighting one paragraph and then in the next a different character would be fighting someone else somewhere else. I’m not sure if this was a formatting issue in the copy that I got or if it was intentional, but there it is.

Still, I definitely liked this one enough to finish it in three days, so there’s that. 😀

The ending left me wanting more, but it didn’t leave it in a place that it wasn’t sensible to stop there. I’m definitely looking forward to the next in the series!

All told, I quite enjoyed this volume of Grimnir’s adventures. I didn’t love it with quite the same intensity that I recall liking A Gathering of Ravens, but it was definitely worth sitting down with, and I’m eager for more. I do enjoy mythological fantasy that touches the Norse pantheon and folklore, and this definitely delivers there, while being rather unique compared to other books in the same genre. 4/5 stars!