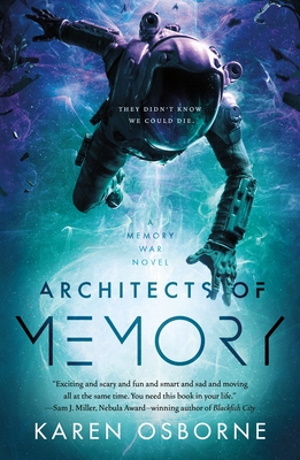 Let us all take a moment to look at this cover. 😍

Alright, now you see why I jumped on this one. I mean I don’t judge books by their covers, but pretty-cover books are way more likely to get grabby-hands Kristen to want them.

So thanks to the author, as well as Tor via NetGalley for the review copy!

Terminally ill salvage pilot Ash Jackson lost everything in the war with the alien Vai, but she’ll be damned if she loses her future. Her plan: to buy, beg, or lie her way out of corporate indenture and find a cure. When her crew salvages a genocidal weapon from a ravaged starship above a dead colony, Ash uncovers a conspiracy of corporate intrigue and betrayal that threatens to turn her into a living weapon.

This is the story of Ash, who is an indentured salvage pilot. In this world, companies rule everything, and those who are indentured to one of the companies can work their way into citizenship… eventually. Ash is in somewhat a hurry to find her way to citizenship, because she’s got a terminal illness and only citizens can afford the cure. When Ash and her crew find what could be a very powerful alien weapon on a salvage job, suddenly everyone from every company is very interested in both it… and Ash.

This was a well written and fast paced space opera in a world of corporations. Humanity is still rocking from a recent war with the alien Vai, an enemy that is as brutal as they are mysterious, because despite the body count they left in their wake, nobody has ever seen one.

I really liked the world that this book described. This isn’t the first time that I’ve read a space opera that took place in a future world of corporations and not countries, but this one was well described, and the idea of these indentured servants (or un-citizens as they are also known) was an addition to the setting that was totally plausible, and thus easy to imagine.

I liked Ash, though I have to admit that I never really latched onto her as I suppose I was meant to. She is terminally ill, and while I did want her to get citizenship and find her cure, I don’t think I would have lost sleep if it had gone a different way. Ash’s relationship with Kate was quite sweet at times, and I liked how Ash’s previous relationship was included here as well. Kate is very important to Ash, but Christopher, the fiance that she lost in a Vai attack, is also still very important to Ash, and his memory sticks with her as much as Kate does. That was a nice detail.

All told, this was a fast-paced space opera with an interesting premise that was well presented. I’m interested to see where it’ll go in the next volume. 4/5 stars!~