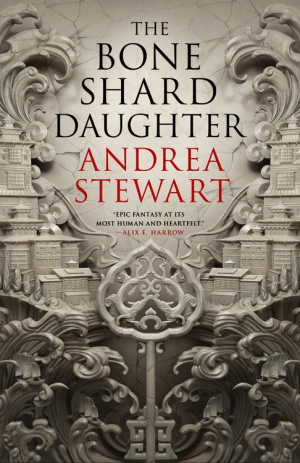 I got caught up in the hype for this book, and it sounded super interesting, and so when I had an opportunity to read an advance copy of it, I jumped on it.

So, thanks to the author, as well as Orbit via NetGalley for the review copy.

The emperor’s reign has lasted for decades, his mastery of bone shard magic powering the animal-like constructs that maintain law and order. But now his rule is failing, and revolution is sweeping across the Empire’s many islands.

Lin is the emperor’s daughter and spends her days trapped in a palace of locked doors and dark secrets. When her father refuses to recognise her as heir to the throne, she vows to prove her worth by mastering the forbidden art of bone shard magic.

Yet such power carries a great cost, and when the revolution reaches the gates of the palace, Lin must decide how far she is willing to go to claim her birthright – and save her people.

My memory was lacking. But I knew who I was now. I was Lin. I was the Emperor’s daughter. And I would show him that even broken daughters could wield power.

This is the story of Lin, who is the daughter of the Emperor of a vast empire. In this empire, there is magic that allows shards of bone, engraved with commands, to power constructs made of various parts of animals and other things. The Emperor is the only person who has this magic, and every person in his empire is expected to give a shard of bone to him as a child so that he can use them to power his constructs, to keep his people safe, or so they’re told. Lin is the Emperor’s heir, but has lost her memories of everything before the last five years, due to a disease. The Emperor is slowly allowing her into the secrets of bone shard magic, as long as she can show that her memories are coming back.

Meanwhile, there is a rebellion taking place among the people who really don’t want to give up shards of themselves, and wish to save their children from having to take on that burden. Jovis is the best smuggler in the empire, and one day, his decision to smuggle a child out of the empire before they could have a shard taken makes him rather infamous. Everyone wants his help to do the same for their kids. When he befriends a strange creature on his adventures, his whole life changes even more.

I really enjoyed this one. It has such an interesting premise, and the bone shard magic is quite well described and has rules that make sense, but the magic in this one takes a backseat to all the other shenanigans that are going on.

I really liked Jovis as a character, and Mephi, his little otter-dog-thing friend. Their friendship held a mystery that I was always striving for the answer to, and that was a great way to keep me invested in the story, even during slower parts.

All told, I thought this was a fantastic debut that wrapped up everything nicely while still leaving me with enough questions that I will be certain to dive into the sequel as well. I can’t wait to see what happens next! 4/5 stars!

2 thoughts on “Review: The Bone Shard Daughter by Andrea Stewart”