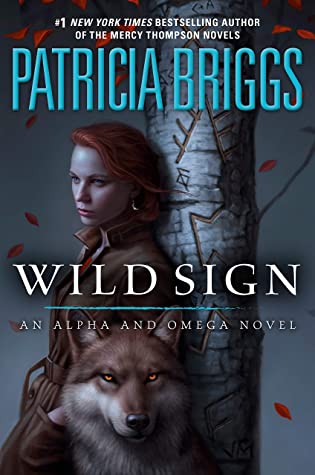 I am a big fan of the Mercy Thompson series, and so years ago, when I found out there was a spin-off series involving Bran’s son Charles and his mate, I was 100% interested and dived right in. I am so happy that they are still happening alongside Mercy’s series.

So thanks to the author, as well as Ace via NetGalley for the review copy!

In the wilds of the Northern California mountains, all the inhabitants of a small town have gone missing. It’s as if the people picked up and left everything they owned behind. Fearing something supernatural might be going on, the FBI taps a source they’ve consulted in the past: the werewolves Charles Cornick and Anna Latham. But Charles and Anna soon find a deserted town is the least of the mysteries they face.

Death sings in the forest, and when it calls, Charles and Anna must answer. Something has awakened in the heart of the California mountains, something old and dangerous — and it has met werewolves before.

This is the further adventures of Charles Cornick and his mate Anna Latham. In this volume, the FBI comes to Anna and Charles to consult on a small off-grid town in Northern California that has gone entirely missing. It turns out that this tiny little town is on some land that is owned by someone in Bran’s pack, and there might be history there. So Anna and Charles (on Bran’s orders, of course) go to investigate the town and they find all kinds of shenanigans out there. Very old and dangerous shenanigans.

As this is the sixth book in the Alpha and Omega series, I’ll try and limit spoilers for the whole shebang. This series runs parallel to the Mercy Thompson series, and while it’s not necessary to read both series to get all the information needed, I’ll say that it’s very helpful to have read some of Mercy’s series at the least.

I thought this was a great addition to the series, though I have to admit that I found it harder to get into at first than some of the previous entries. Once I was a couple of chapters in though, it really captured me. This one was a lot darker than some of the other books in this world, and I was here for it. We get to see a lot of Leah’s past, and I’ll admit that just like Burn Bright, this one had me hating Leah less than normal. I mean I still don’t like her, but I see reasons for her being the way she is.

I really like the relationship between Charles and Anna, and that includes Charles’ very unique wolf spirit, a being called Brother Wolf. Anna is an Omega, who other wolves generally try and protect, and Charles is very much the Alpha to her Omega. If his father wasn’t who he was, Charles would 100% be running the show. I find Brother Wolf an interesting being, because no other werewolf has anything like him.

There were twists and turns, and parts that made me legitimately scared for the characters. There is also a really solid musical theme in this one, featuring references ranging from 90s alternative to Mongolian Folk Metal. Anna does have a vast musical education, and Charles is from a very musical family, and so music wasn’t unexpected, but I’ll admit I wasn’t really expecting The Hu to make an appearance. Or Toad the Wet Sprocket for that matter. I am here for it. 😀

This one left me wanting the next book in the series very badly. That epilogue tho… I can’t wait for more!!! 4/5 stars!~

One thought on “Review: Wild Sign by Patricia Briggs”