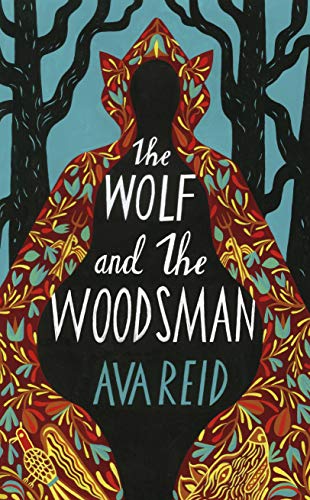 This was one that I had originally planned to read sometime later this year, but a good friend of mine convinced me that I really, really needed to request a NetGalley, and that I would thank her later.

So, thanks to the author, as well as Del Rey via NetGalley for the review copy.

And yes, thank you Sara for the recommendation. You were right. There I said it.

In her forest-veiled pagan village, Évike is the only woman without power, making her an outcast clearly abandoned by the gods. The villagers blame her corrupted bloodline—her father was a Yehuli man, one of the much-loathed servants of the fanatical king. When soldiers arrive from the Holy Order of Woodsmen to claim a pagan girl for the king’s blood sacrifice, Évike is betrayed by her fellow villagers and surrendered.

But when monsters attack the Woodsmen and their captive en route, slaughtering everyone but Évike and the cold, one-eyed captain, they have no choice but to rely on each other. Except he’s no ordinary Woodsman—he’s the disgraced prince, Gáspár Bárány, whose father needs pagan magic to consolidate his power. Gáspár fears that his cruelly zealous brother plans to seize the throne and instigate a violent reign that would damn the pagans and the Yehuli alike. As the son of a reviled foreign queen, Gáspár understands what it’s like to be an outcast, and he and Évike make a tenuous pact to stop his brother.

As their mission takes them from the bitter northern tundra to the smog-choked capital, their mutual loathing slowly turns to affection, bound by a shared history of alienation and oppression. However, trust can easily turn to betrayal, and as Évike reconnects with her estranged father and discovers her own hidden magic, she and Gáspár need to decide whose side they’re on, and what they’re willing to give up for a nation that never cared for them at all.

“You have the uncommon ability to make me doubt what I once thought was certain,” he says. “I’ve spent the last fortnight fearing you would destroy me. You may still.”

This is the story of Évike, who is a pagan girl from a remote village. Every couple of years, the Woodsmen come from the capital city, and they take one of the magical girls from their village for the king. This time when they come, Évike, who has no magic to speak of, is disguised as one of the magical girls in their wolf cloaks and given to the Woodsmen. Halfway back to the capital, they are attacked by monsters. Only Évike, and Woodsmen’s captain, Gáspár survive. Only Gáspár is more than meets the eye, he is actually the king’s firstborn son, which means per their religion, that he is the heir. Gáspár’s father is trying to collect pagan magic to win a war, and his overly-zealous and cruel half-brother is attempting to undermine him to seize the throne. As they journey together, Gáspár and Évike make a pact to stop his brother from seizing power, and many shenanigans are had along the way.

Reader, I adored this book. I picked it up late one night after finishing another, figuring that I could get a chapter in before having to sleep and then suddenly it was 3am? How did this happen? I have no idea, but I’m pretty sure that I can’t put this book down. It’s so easy to just pick it up and read it for hours and hours.

Évike was a really likeable character, to me. She’s often understandably snippy, to Gáspár or to other people she meets. But she is navigating a world where everyone has been cruel to her, either for being magicless, being pagan, or, as she comes to meet her estranged father, exploring her Yehuli heritage. The book is told from her POV and she told her story very well. I also really liked Gáspár and how the relationship between the two of them changed over time. It was such a torturous slow-burn. So good. Loved it.

This is such an evocative and immersive book that is inspired by Hungarian history and Jewish folklore, and watching Évike, a child of two cultures that the rulers of the kingdom have no love for, try and find her place in the world, was very gripping. Even though it can be quite gory at times, and full of feels, I still read this book in just two sittings, because I could not put it down. What a fantastic debut! 5/5 stars!~

2 thoughts on “Review: The Wolf and the Woodsman by Ava Reid”