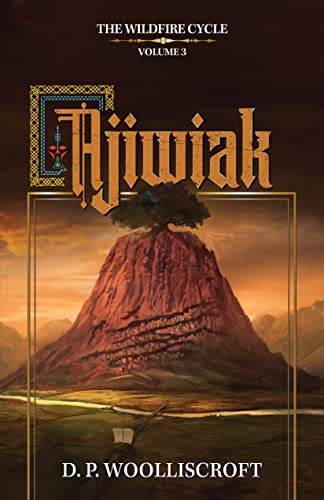 I’ve quite enjoyed my time with this series up until this point, and so when a review copy of the third book in the series was offered to me, I couldn’t pass it up!

So thanks to the author for the review copy!

ALL IT TAKES, IS A SINGLE SPARK

Llewdon, ageless elf and Emperor of Pyrfew, has his sights set on becoming a god, and only the collective sacrifice of thousands of Alfjarun from Alfaria, the Wild Continent, can carry him there. Kingshold is taken and Ioth is ash; his plans are proceeding exactly as intended.

But Neenahwi and Motega of the decimated Wolfclaw clan have returned to Alfaria with the heroes of Kingshold as their companions. Can they navigate a homeland that has changed much since they were children to bring the clans together to resist Pyrfew? And what role will the fabled city of Ajiwiak, home of the first of their people have to play in their liberation?

This is the continuing story of Mareth Bollingsmeade and his friends and compatriots as they take on gods and monsters while fighting the empire of Pyrfew. In this volume, Pyrfew soldiers have gone to the far away continent of Alfaria, the place of Neenahwi and Motega’s birth, and they’ve started converting the natives and taking slaves to bring back to their Emperor, Llewdon. Mareth and his friends have traveled a long way underground, and now its time to take on the enemy and save the people of Alfaria.

Mareth seems to take a bit of a backseat in this story at first, and Motega and Neenahwi run the show, which makes sense, since Motega and Neenahwi are from Alfaria, originally. There is a lot of freeing slaves and fighting Pyrfew soldiers, and then half of the party decide to travel to the near-mythical Ajiwiak in order to find help.

I’ll admit that I was not as pulled into this book as I was the previous two. The first quarter or so seemed to drag in places, and I found myself getting a little bored of it from time to time. I set it aside to read other books for a while, hoping that when I picked it up again, I would fall into the story (which worked!). It wasn’t that I didn’t like the writing, because it has always been great. And it wasn’t that I didn’t like the characters, because I’ve always liked Motega and Neenahwi and their friends, but it just seemed like they weren’t doing anything all that exciting for a while. Once half of the party travelled to Ajiwiak, though, it got quite interesting though, and from that point I had no problem reading it for hours at a time. Well past my bedtime.

The people of Ajiwiak were interesting, as they are a little more technologically advanced than the rest of the natives of Alfaria, and have things like ships that travel over land and advanced farming techniques. They have an interesting culture centered around the great tree at the peak of their mountain home (which is also called Ajiwiak, just as their city is). The party makes a few friends here, and I really hope that some of these characters remain with Mareth and company, because I latched right onto them.

All told, while it had a slow start, I quite enjoyed Ajiwiak and found it hard to put down in the end. It jostled my feels a few times, and made me care for its characters, even the new ones. I’m excited to see where the story heads from here! 4/5 stars!~