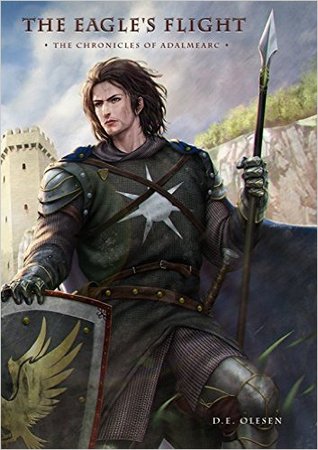 The TBR of Babel is getting legitimately smaller, guys, and this is so, so exciting! XD

Peace in the Seven Realms of Adalmearc is only as strong as those who rule them. With the death of the high king and his heir too young to assume the throne, political intrigues fill the landscape as the leading noble families scheme and plot their way to power. Meanwhile, enemies abroad sense the changes and make their own preparations.

Standing as a safeguard against both foreign foes as well as enemies closer to heart are the Order and its knights. Keeping the realms of Adalmearc united and at peace is their foremost duty. But when the strife turns political and the enemy is difficult to discern, when alliances shift and allegiances are torn, even the hitherto unassailable honour of a knight may become stained.

“The Eagle’s Flight” compiles the first three of the Chronicles of Adalmearc. It is a journey into the fantastic world of Adal, its realms, peoples, cultures, and conflicts.

“In my experience one should never attempt to match wits with fools. If you win, you prove only that you are wiser than a fool, which should be self-evident. If you lose, you have made yourself seem to be the greater fool.”

This is actually a book in three parts, if you will. All in one volume but with three distinct story arcs.

The hardest part of reading it, for me, was that there are sooooo many characters in this thing, and many of their names are alike. The world is called Adal, but the continent (I think?) that it takes place in is Adalmearc, and the country that the first part of the story takes place in is called Adalrik. It’s not just places that have this prefix either, but characters as well. For instance, Adalbrand, who thankfully shortens it to Brand most of the time, lol. But, it got legitimately confusing sometimes when I was trying to remember who was who in the grand scheme of things. Athelstan and Athelbold. Konstans and Konstantine. Isenhart and Isenwald. That sort of thing. It isn’t unusual that fathers and sons and so on have very similar names here, but there’s just so many of them that it’s hard to keep track at first, lol. Trust me that it does get easier as you become more familiar with each character.

The first part of the story focuses on the Adalthing (yep, this too), which is a sort of meeting that all the jarls, thanes, margraves, and so on of Adalrik are invited to to hash out who is going to take the spot of Lord Protector of the land, since the king has died, his son the prince has died, and the only surviving heir is too young to take the throne. Much political maneuvering is done here as each jarl is trying to influence the results. There’s also a contest held just before it, with a joust and archery competition and what have you. And some other shenanigans go down in the land after the Adalthing is over. Many shenanigans! And this is just part of part one, lol.

I quite liked a few of the many characters in this book. Notably Theodora, the Queen of Haethiod, and Leander, the bastard son of the king (and her cousin). They were my favorites. Theodora grew as a character so much over her section of the book, and I loved it. There’s also Adalbrand, who is a nobleman taking over lordship of his house, while also trying to find his place among the knights of the realm. He is just returned from many years of training to be a knight and squiring for Sir Athelstan. I also really liked Ælfwine, who is quite an interesting person indeed. The King’s Quill (usually just known as Quill) is another character I liked to read about. Here’s basically the court scribe, but he has a fair deal of responsibility and influence among the court. There are others of course, like Godfrey, the mysterious vagrant, Troy the not-very-good-bard, and Adalbrand’s sister Arndis… but this thing is already getting long.

This book was indeed very, very long, and I found myself a little bored with it at first, but I’m really glad I suck with it. I don’t normally dig books that have very complicated political maneuvering and battling and so on because I often find politics and very detailed warfare (and by this I basically mean very detailed descriptions of strategy and troop movement/placement) kind of boring, but there was enough action and interesting characters and events to keep me interested in this book in the end. Right around 25% or so I found it harder and harder to put this beast down. Part 2 was absolutely riveting for me, all told. It’s really quite well written, with a whole slew of plot twists and unexpected happenings in it. You never really know what’s going to take place, and it legitimately surprised me more than once. The worldbuilding is great, and the characters and events were described in a way that made them easy to imagine. There was a lot of planning, and it all made sense to me. Like, this book sounds like it would fucking own my ass at a game of Risk.

Overall, I really ended up liking this one, even if it didn’t catch my interest right out the gate, it certainly caught it before the middle. I admittedly liked the second story much more than the first or third, as it takes place in a different country with different characters that I think I just liked better…. but the whole thing was pretty well thought out and well executed as a novel. Very, very detailed. I give it 3.5/5 stars!