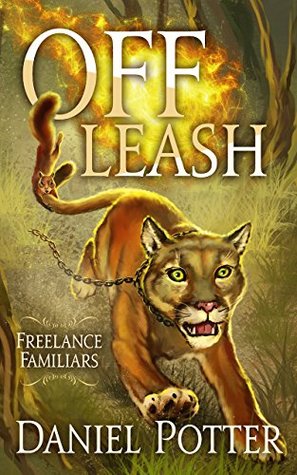 The fact that this one had an audiobook edition made it so much easier to finally get to it. Thanks audiobooks!

When Thomas Khatt awakens to the magical world following the sudden, violent death of his elderly Archmagus neighbor, he doesn’t get the standard package of awesome power combined with a hero destiny. Nope, he trades his thumbs in for a tail, tawny fur and four feet with a very low co-efficient of friction on linoleum. His destiny as one of three talking mountain lions in the magical world? To be sold at auction and bonded to some pimply faced apprentice for life.

Armed only with an impressive set of chompers and buckets of snark, Thomas faces off against a lightning-bolt throwing granny and a sexy union recruiter as he desperately tries hold the threads of his old life together. To stay off the leash he’ll have to take advantage of the chaos caused by the Archmagus’ death and help the local Inquisition solve his murder. A pyromanic squirrel, religious werewolves, and cat-hating cops all add to the chaos as Thomas attempts to become the first Freelance Familiar.

For a moment I feared I had fallen into a Disney film and the kitchen appliances were about to burst into song. I gave the toaster a withering look just in case.

This was a fun book, with a very interesting premise.

Thomas Khatt is a regular guy in a regular town when suddenly his secretly-magical neighbor dies, and he wakes up the next day as a cougar. He’s in a magical world and is a familiar, an animal companion to a magus. Usually they are auctioned off and bonded to some apprentice or other, but Thomas has other ideas, because eff all that noise. He’s not bonding to anyone forever, but to stay freelance, he’ll have to help the local magical detectives solve the murder of his neighbor the Archmagus.

Yep. Interesting premise, as I said.

This book made me chuckle quite a few times, and any book that does that is generally looking to be a pretty good book. It was well written, well paced and the mystery stayed a mystery throughout most of the book. I was more interested in seeing Thomas navigate this new and mysterious world with his new and sometimes-awkward feline body than I was interested in the whodunnit, but that didn’t make this book any less interesting.

Thomas was a character that I could easily cheer for, as his whole world is suddenly thrown into chaos, and everything is magical, there are pyromaniac squirrels and fanatic werewolves, among other things. Some of the background characters were often hilarious, but never stole the show, so to speak.

The narrator, Jonathan Waters, did a pretty great job in my opinion. He made each character unique and made the story come to life. Some of the accents seemed a little forced, but this book has a lot of accents peppered through it, and so for someone to do more than one capably is actually quite amazing to me just for starters.

So, all told, this was a quick, fun listen that served to make a nice Sunday afternoon of listening and giggling while I worked on a cross stitch. An easy 4/5 stars.