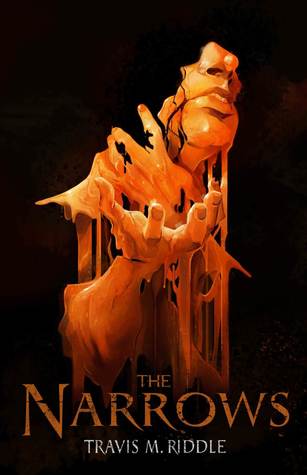 This was a review request that I had to put on hold a little bit for the SPFBO. But I’ve found time for audiobooks again, and so this was on the top of my list!

This review is based on a review copy of the audiobook. Thanks to the author for the review copy!

“I can show you how to enter the Narrows to find what you seek.”

Oliver and his friends have returned to their hometown of Shumard, Texas for the funeral of their close friend Noah. They each grapple with the loss in their own ways, trying to understand the strange circumstances of their friend’s unexpected death.

While visiting the site where the body was found, Oliver stumbles across a chilling discovery that he knows must be related to what happened to Noah. Wanting to protect his friends from these newfound horrors, Oliver takes it upon himself to venture into the grotesque otherworld known as the Narrows to learn what happened to his friend and find a way to bring him back.

Entering the Narrows is one thing, but will whatever he finds there allow him to leave?

When he got angry, or nervous, or regretful, or—the list went on—Oliver would imagine conversations in his head with people. He’d go through what he wanted to say to them but probably never would, or how he wished he’d handled something in retrospect. Over the past two years, he held a significant number of these conversations with Noah. He’d lay in bed at night, tossing and turning, thinking about what he wanted to say to his friend. The more he thought about it, the more it seemed like a need than a want. But he never said those things, and now he was never going to say those things. They would remain boiling frustrations in his head, bubbling over, threatening to spill out.

This is the story of Oliver, who is recently back in his hometown to attend the funeral of one of his best friends from high school. What Oliver discovers when he is visiting the place in which his friend Noah allegedly committed suicide is a man melt into a gross mushroom-filled orange liquid accompanied by a loud buzzing sound. All this culminates into Oliver discovering another world known as The Narrows, and he knows that this place and its creepy denizens are responsible for the death of his friend. And so he goes to investigate.

This one has a real good Stranger Things vibe in the latter half, as The Narrows seem quite similar to The Upside Down. It takes place in the present day and follows people who are in their mid-twenties, but the creepy-other-world vibe is very strong.

I actually have a bit of a fortunate advantage here, in that this story takes place in a made-up suburb of Houston, and I also live in a suburb of Houston (albeit on a different side of the city than the city this is based on). This means I get a lot of little things about living here that this book lays out there. Kolaches, for example, are mentioned quite a lot here (making me want some), and will either be an unfamiliar phenomenon, or mean different things depending on where you live (especially if you are from Europe). They are a huge thing in this particular part of Texas, and in this context refer to a sweet bread usually filled with things like sausage, cheese, egg, and/or jalapeño. It sounds a little silly, but this familiarity made me a little more at home in the setting, because I can quite literally imagine myself in it, lol. ^_^

That said, the underlying creepiness of The Narrows was easy to imagine, and the horror-fantasy atmosphere was really gripping. This was a very well written story, and I found myself immersed right in it. There is a pretty diverse cast of characters, with characters of all kinds of races, genders and sexualities. Most of the characters were well fleshed out and had unique quirks and personalities. I listened to the entire thing in two days. I cheered for Oliver, and hoped for him to save the day and find out what happened to his friend.

The narrator, Scott R. Smith did a pretty great job. He brought each character to life. My only real issue with the audiobook as a whole was that at times, you could hear things in the background of the audio recording. Usually birds tweeting, which… wasn’t necessarily the worst thing one can hear in the background of an audiobook, but it was certainly distracting from time to time.

So all told I liked this one a lot. An Urban-Fantasy-Horror which felt like a modern-set Stranger Things with more Waffle House, BBQ, and Kolaches. I’m on board with those things, and so I had a good time with this one. 4/5 stars!~