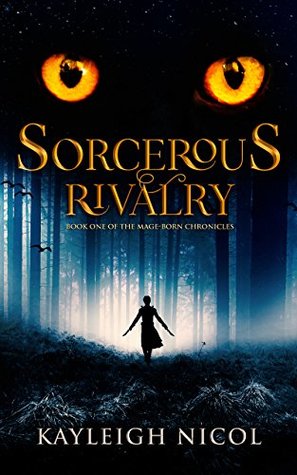 Time for a SPFBO Review!!

In the peace following the Great Mage Hunt, the king’s long-time mistress is revealed as a sorceress. Locked away for the safety of the kingdom, bounties are placed upon the heads of the seven children she birthed. Mage hunters have scoured the kingdom for four years, searching for the seven scattered mage-born bastards.

After growing up in an orphanage, Reshi discovers his parentage and learns to hide his magic, living peacefully in a remote village with an unusual friend. But when an alluring mage hunter comes to town, his secret is revealed, forcing Reshi to reach out to his brothers and sisters for help. A family reunion might be Reshi’s only hope for survival–or it might become a spell-slinging battle royale.

Who can Reshi rely on when his own family turns against him?

As cats know all things, they have no translation for a shrug.

This one was legitimately on my TBR before the SPFBO started so, having an opportunity to read it for that purpose was great (and also probably saved it a few years on the TBR list, lol). Hooray! Esme read this one and liked it (despite it having *gasp* romance as a pretty major theme!) and so passed it along to me as well.

This is the story of Reshi, who is secretly a mage. Not just any mage though, the king (who hates mages) and his mistress (secretly a mage) had seven children. When the king found out that his mistress was a mage, he threw her in prison and put out bounties for the seven kids. Reshi is the youngest of these kids. They don’t know each other at all, because they didn’t grow up together, and they’re in hiding, for the most part. Mage hunters are constantly looking to kill them for the bounty.

Each of the kids have different powers, and the older ones are generally more powerful than the younger. Reshi is a shapeshifter, with a few different forms that help him sneak around. Reshi, having grown up an orphan in a town known for its seedier underside, is a pretty capable thief, and can hold his own pretty well with daggers and throwing knives. He’s been living in a small village for several years, under the protection of an exiled fairy.

One day a mage hunter named Kestral wanders into town, and shenanigans ensue that not only out the fairy, but they out Reshi too, and he runs from the village right into the arms of one of his sisters. She’s hoping that all the siblings can come together as a family and stick together. So when one of their brothers shows up, Reshi is hoping for a lovely family reunion. And… that’s when he learns that if one of his siblings dies, their power can be collected by another, making that sibling more powerful. Also it turns out that like 75% of his siblings are power hungry murderers, and so he runs again, with not only murderous siblings on his tail, but Kestral too.

It’s Kestral that catches up with him first, but instead of killing him, Kestral decides to help him get some vengeance against his murderous brother. So they make a deal to become companions until Reshi gets his vengeance, but then Kestral will probably kill him. But, he’ll give him a head start though, because he’s an honorable guy. But it turns out that vengeance takes a little longer than anticipated, and they go through a lot of adventures getting to it.

This was a really quick and easy read, which was hard to put down once I got into it. Admittedly the first few pages made my eyes roll because the way that the fairy is introduced is very, very ‘bouncing boobily’ and I had to stop myself from just putting the book down and sighing. However, I stuck with it, and I’m glad I did. There wasn’t any more egregious bouncing throughout the rest of the book.

There is a romantic subplot that makes up a decent amount of this story, between the two male leads. There appears to be no stigma regarding sexuality in this world whatsoever, so that was nice. The romance between Kestral and Reshi was a fairly slow burn, and while there was obvious attraction between them from the get-go, especially from Reshi, as this is told from his POV in the first person, I didn’t feel like the romance was the only thing holding this plot aloft. I felt like the plot would have held up pretty well had there not been a romance included. So, if they had remained just companions, I don’t think the overall plot would have suffered for it, but I thought the romance was well done, and I rooted for both of them throughout. There are ups and downs, Reshi has his reasons for what he does, and Kestral his own for what he does. Sometimes they are maddening, and sometimes adorable. But, I thought that this part of the plot worked out well.

Reshi is a great character who is so easy to like, and I rooted for him from the very beginning. He’s pretty down to earth, he’s often snarky, and witty. I love a snarky rogue, you see, and Reshi is very much that. He’s rather lovable, in his way. Even when he’s being stupid, which is more than never. Kestral is more of the stoic ex-soldier type. Seeing the banter between Reshi and Kestral, and seeing Reshi be able to make Kestral truly laugh made me smile.

The magic system was really interesting, and well executed I think. Each sibling has specific powers, and as some siblings die, some of those abilities are distributed over the other siblings. So, Reshi finds himself gaining new abilities just by being on the sidelines of a bunch of his siblings’ infighting. Also, some of the ways that Reshi uses his shapeshifting abilities to get out of (or into) trouble, were well thought out. There’s also a fair bit of fighting, and I thought it was well described. It was easy for me to imagine at any rate. Kestral is a fighter of some skill, with a sword or a bow, and Reshi is, as I said, perhaps not super-skilled, but certainly not unskilled with daggers and throwing knives. I imagined him as any number of roguish characters I have played in various games over the years.

There was fake cursing, which I am known not to like. But, I will give this one half a pass, because while the fake cursing was used in place of the f-bomb, it was also used in place of most other swearing, too. The thing that gets it a partial-pass, it that the word used in lieu of swearing has other colloquialisms and expressions in the world based on it, and really, you don’t usually see authors going to such lengths to fake-swear. So, I’m conflicted. On the one hand, just use the damn f-bomb, but on the other… props for actually going the mile and doubling down on your fake-curses, I guess?

The ending made sense, and definitely left this one open for more story (there better be more story *glare*), but I would not consider it a cliffhanger, exactly. It does end rather abruptly, and while I was worried that it would end in an unsatisfying manner, it… it wasn’t very unsatisfying given some of the information imparted at the end. I’m okay with it.

So, I loved the characters, I loved the magic system, I found it really hard to put down (and if I didn’t drop my kindle on my face at about 75% I probably would have read it all in one night, but alas, I guess sleeping was a thing), and while the beginning was a bit eye-rolly, it bounced back (#notsorry) quickly to become an enjoyable slightly-romancey magey romp with plenty of action, stabbing, and magical siblings killing the hell out of each other.

I’m going to say that I had 8.5/10 stars of fun with this book. I will very likely read any sequels!

One thought on “SPFBO Review: Sorcerous Rivalry by Kayleigh Nichol”