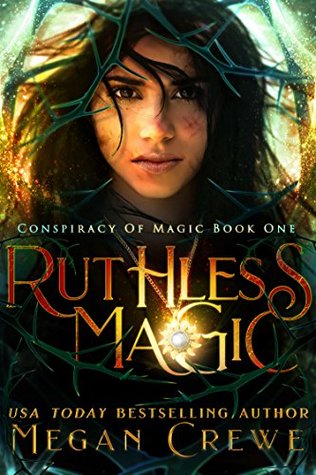 Moving right along into endgame territory. I’m nearly done all of the finalists for this year’s SPFBO!

Each year, the North American Confederation of Mages assesses every sixteen-year-old novice. Some will be chosen. The rest must undergo a procedure to destroy their magical ability unless they prove themselves in the mysterious and brutal Mages’ Exam.

Disadvantaged by her parents’ low standing, Rocío Lopez has dedicated herself to expanding her considerable talent to earn a place in the Confederation. Their rejection leaves her reeling—and determined to fight to keep her magic.

Long ashamed of his mediocre abilities, Finn Lockwood knows the Confederation accepted him only because of his prominent family. Declaring for the Exam instead means a chance to confirm his true worth.

Thrown into the testing with little preparation, Rocío and Finn find themselves becoming unlikely allies—and possibly more. But the Exam holds secrets more horrifying than either could have imagined. What are the examiners really testing them for? And as the trials become increasingly vicious, how much are they willing to sacrifice to win?

“When life hands you lemons, juggle them and see how many people will laugh, even if it’s only you. I find thumbing my nose at the worrying makes me feel better and makes the hard parts easier, even if I’m still worried.”

This story is told in an alternate New York city where magic exists. Mages are out, so to speak, to the public, and as such, are highly regulated by the Confederation of Mages, who work with the government of the ‘Dulls’ (non-magic users). When a mage turns 16 years old, they are either accepted to magic school, or they are Dampened, which means that their magic is mostly taken away, leaving them with perhaps one magical skill that makes them better than normal at something, like sewing or cooking. They can contest this decision by agreeing to take ‘the Exam’ which would put them in a very dangerous test of magical ability. If they pass, they can keep their magic, and if they fail they’ll lose it forever.

Finn Lockwood is more or less from a rich mage family. His Granduncle is on the Circle of Mages and as such, on the day when all the 16 year olds get their letters, he gets one that invites him to the college. But, his best friend Prisha is from a ‘new magic’ family, and while they are rich, she is the first in her family to manifest magical ability. This of course means that the Confederation doesn’t trust her, and so she isn’t invited to magic college. Not wanting her magic taken away, she opts to take the Exam.

But Finn feels that this is very unfair, because Prisha is so much better at being a mage than he is. So he opts to take the Exam as well, so that he can prove to himself and his family that he actually deserves to be a mage and isn’t just riding on his family’s coattails.

Another talented mage, Rocío, is from a new magic and rather poor family. Of course she isn’t invited to the college either, and opts to take the test.

On Riker’s Island, where the Exam is performed, they all come together to show that they’re mage enough to keep their magic. And much shenanigans are had.

This was a fairly fast-paced novel, which kept my interest well into the wee hours of the morning. It’s well written, and had characters that I definitely cheered for. Finn is good people, especially given that he’s willing to risk his life and his magical skill in order to prove himself worthy of it in the first place. Rocío was easy to cheer for as well. I wanted her to win all the things and prove the Confederation wrong about who is worthy and who isn’t.

The Confederation and their Examiners who are giving this test started out as the obvious antagonist but as the story went on and the Exam became more and more dangerous, the institution became almost comically evil. It has this in common with the Hunger Games, except that this book takes place in more-or-less our world in our time, so, it went a little more over-the-top than I thought was necessary to get the point across that the Confed are monstrous and must be stopped. The idea is to make some of these kids into magical super-soldiers, which is fine as a premise but they go from relatively normal American teenagers (except magical) with no combat training to pretty much a battle royale to the death in the space of 3 days or so.

The magic system was interesting. It seems to be based largely around music or prose, but it varies in language from person to person, depending on what they’ve learned over the years. Finn often casts spells seemingly off the top of his head using a poem, or a song lyric, or a few words in Latin or Greek, as long as the intent is there, it’ll (usually) work. I can’t really imagine a world of mages wherein all mages would have to have… well, perhaps not perfect pitch, but enough musical skill that they could cast a spell properly, but it works without singing as well. Some people get away with humming to cast spells.

It had some romance in it, too, which was rather adorable at times. Finn and Rocío are cute together, and their cooperation to get through the exam despite being from different backgrounds was a nice counter to some of the more horrible events that began to happen as the book went on. I’m interested to see where this story goes past this novel, so here’s hoping that reading the sequel is in my future at some point. 😀

All told, it was a pretty quick read that was well written and well edited. An interesting magic system combined with characters that I could root for and want to see win against an antagonist that was very, very obviously worth winning against made for an engaging and entertaining read. 7/10 stars! (This is just my score, not the final score for Team Weatherwax).