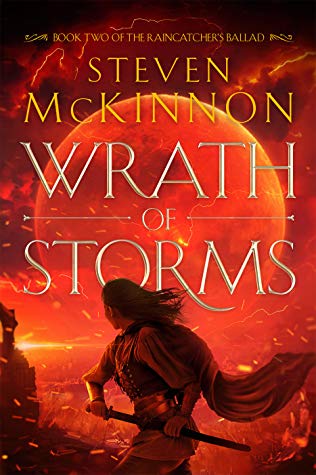 My favorite book that came out of last year’s SPFBO was Symphony of the Wind, which surprised me not by being awesome, but by being just… exactly all the things I love in a book.

So when I was approached with the sequel, well… I was all over it.

So this review is based on a review copy, and thanks to the author for that review copy.

A girl with terrifying powers. An assassin battling his bloodlust. And an ancient evil stirring…

Serena’s fearsome power is growing stronger. After conning her way aboard a luxury airship in search of clues about her past, she walks straight into a sky pirate’s trap. But after her powers are unleashed and apocalyptic visions invade her mind, Serena realises the greatest threat may be herself…

As Damien Fieri struggles against his bloodlust, connections in high places conspire to keep his killer instincts sharp. He’d love to confront the clandestine forces that turned him into a living weapon—but can he find a way to do it that doesn’t shed more blood?

Can Serena and Damien bend their powers for good, or will they become dangerous pawns in a much deadlier game?

Catryn lit a crooked cigarette and eased herself into a wooden chair. The smoke coiled around her, merging with the grey streaks in her hair.

‘Half the material in this room is flammable.’

This is the continuing story of a few people from the city of Dalthea. Serena is a young woman who has just found out that she has some pretty awesome powers. Tyson Gallows, a former soldier turned bounty hunter is traveling with her, as is Myriel, the guildmaster of the Mage’s guild. Damien Fieri is living out in the forest he once trained in, trying to battle the bloodlust inside of him that makes him lose control and become a near-unstoppable killing machine. But circumstance brings them all into the country of Ryndara.

Admittedly, most of my attention went directly to the same person it went to in the last book: Damien Fieri, the mysterious man who is very, very good at what he does, and what he does is murderkill all of everything, ever. Well, I mean he tries not to, mostly successfully! But, nonetheless he has been honed pretty well as a weapon, and part of him really, really wants to. He can regulate his own temperature, hear the heartbeats of others, and generally kick all kinds of ass. This volume has more of his backstory, and I can tell you that I was super excited to find out his deal. And we do. We find out who he really is, and a little of how he became what he is.

I also really liked Serena in this volume. More, I think, than I did the in the last volume. She’s not quite sure at first if she wants the power she has, and so when she finds out that she might be able to get rid of it, she goes for it. Shenanigans abound on her quest. She does not take anyone’s shit though, and I love it. She is so fucking snarky, and basically me when I was 16 only with… like, magical powers.

‘I will usher in a new period of—’

‘Gods above, we get it. Reckon you’ll bore me to death before you get close enough to use that knife.’

Just like Symphony, this book was very well written and flowed really well. I love the dialogue between characters, as many of them (not just Serena) are quite snarky towards each other. It wasn’t a short book, but I still found myself sitting down with it for as long as I could to get as much of it in my face as I could at a time. There was always something going on to keep it interesting, and there were plenty of twists and turns along the way. The ending kept me on the edge of my seat. So damn good.

I love how unique this world it. It’s industrial-revolution-with-magic setting is really interesting to me, and I never get bored of hearing about the airships or the clockwork machines that the King of Ryndara has in his palace or anything like that. We get a pretty good look into the past shenanigans of this world too in this volume, which was neat.

So, all told, I liked this one just as much as I liked Symphony, and I think that anyone else who really enjoyed the first volume is going to like this one as well. I honestly really hope this series gets made into audiobooks someday, because I think that with the right narrator they could be bonkers-amounts-of-amazing. It’s pretty safe to say that I’m very excited for the next volume! 5/5 stars!~