Wherein Kristen does an interview, because she has all kinds of questions, and needs to KNOW THINGS!

Right, so, if you’ve looked at my blog or twitter for more than 5 seconds, you’ll hardly be surprised that my first interview of all forevers is that of the author of one of my favorite books of all time.

I stumbled upon The Last Sun at my local library (books, check ’em out), and it caught my interest instantly entirely because of the cover (don’t judge me… for uh… judging. It has a gorgeous cover). A quick skim of the blurb was all I needed to know that this book would be entirely up my alley. An urban fantasy based around the major arcana of the tarot? Uh, yes please, sign me all the way up for reading that. What basically followed was a bit of an obsession with this series and its characters. It’s been awesome to see my friends read it too and get just as obsessed.

So, with the impending release of the sequel, The Hanged Man, I thought…. time for some answers to some of my own curiosities!

And I do need to give many, many thanks to K.D. Edwards for being my first ever blog-interviewee. ^_^

First of all, tell us a little about The Tarot Sequence for those not in the know. Book 2, The Hanged Man comes out soon. Are you… hanging in there (#sorrynotsorry)? Getting nervous? Super excited? Bit of both?

The TAROT SEQUENCE is set an an alternative modern world where Atlantis has always existed, and now thrives in a city on the island of Nantucket, off the coast of America. The powers in the city are based on the major arcana of the tarot deck, and the hero (and his lifelong bodyguard) is the last prince of the Sun Throne, one of those Arcana. These novels are the stories of their adventures.

I am….Er…Yeah. All of the above. A few readers got together and created a massive promotional effort on my behalf, which is flattering as hell, and has really, really engaged other readers in the lead-up to the launch date. A lot of people are interested in the story now, which is nerve-wracking. And they are people I’ve come to genuinely appreciate & like through social media, which means their opinions mean SO DAMN MUCH.

I really hope I got HANGED MAN right. It’s my sophomore novel, and the second in the first trilogy, which means it’s like the middle child of a middle child, in a way? Fortunately, a lot of really motivated readers have seen an early version, and feedback has been overwhelmingly kind.

There are lots of similarities between the tarot, and your world based on it. For example, The Tower card sometimes indicates the destruction of something giving the opportunity to rebuild. That Rune ends up with The Tower just as he had hit rock bottom seems either a hell of a coincidence or a remarkable bit of worldbuilding. Or that Lord Tower is credited with basically holding everything together to allow Atlantis to rebuild after the war. Have you always been interested in the tarot, or did the idea for the Tarot Sequence come first?

I’ve always been interested in the major arcana, more specifically — and how they are archetypes for the human condition. I’ve been obsessed with the Tower card longest: it’s the card of deception and spies, and always indicates something big in a reading. (When I was in college, there was a famous story related to a local Maine psychic, who helped reveal the spy Aldirch Ames to his wife during a reading — it’s a big cold war story. She did a reading for me once, too.) I can’t promise that the incarnations I create are always true to the card, but I’ve tried to make sure the theme of the story is reflected in the card in some way — or it’s reverse. I have a lot of plans in the future for the Devil, the Wheel of Fortune, and the Star….

That said, I’m still learning a lot about tarot decks. My readers, in particular, are really knowledgeable. I hope to create my own one day based on my series!

I’m interested in ruins. I love, love websites that have to do with urban exploration and abandoned human ruins. I love photos of them. So much elegance and disrepair — and, a lot of times, so many dramatic stories tied to their past. You’d be surprised how many websites talk about this. Especially RECENT ruins. Ancient archeology requires a lot of supposition and research; but there’s just as much excitement in abandoned Olympic Parks, or carnivals flooded after hurricanes, or old Cold War bunkers. What a setting for a story! And I have a city stitched together from them.

Addam fills his sigils by listening to music. What are some of the songs on his playlist? Are there different songs for different spells? Different genres for the type of spell?

I bet there are, though I’ve never dived into that. I’ve always imagined his taste in music heavily frozen in the 1990s. I can see him listening to SOUP DRAGONS, SPIN DOCTORS, HOOTIE AND THE BLOWFISH, NIRVANA, U2, OASIS….

That said, do sigils function as a physical tether for magical spells, or is it more of a focal point for energy to gather? Is it possible to use digital memory as physical space to store spells? For example: can spells be tethered to apps on a smart watch?

A focal point and storage decide both. While a sigil can be shaped as anything, it took a phenomenal amount of time to create one — hundreds of hours of effort by master magic-users. It’s a dead art now, though. There are no computerized sigils, for instance — the ability to create them predates modern technology. That said…. who knows what the future holds?

Humans and Atlanteans have warred with each other in the past. How do humans see Atlanteans now, after everything that has happened? Are they reviled, feared, worshiped?

Humanity’s perception of Atlanteans has improved tremendously thanks to the efforts of economic powerhouses like Lord Tower, Lord Magician, and Lord Chariot. It’s rare for Atlantis to share its magic with the human world, with one pronounced exception: their portal magic. There are portals scattered about the human world, and New Atlantis serves as a transit hub. Lord Magician’s magic, and Lord Chariot’s logistics, have made this an exceptionally lucrative operation. And Lord Tower invests in the human world heavily — he’s made an empire out of it.

But all of this is largely a smoke screen. The veneer is barely skin deep. Deep down, Arcana still run everything behind the scenes. They can be violent and lawless, and highly manipulative. And some of them have NOT adapted well to the modern world. If humans were aware of even a fraction of the things that Lord Hanged Man had done, they would turn on Atlantis in a heartbeat. It’s a very, very precarious political & social balance — and one that I refer to heavily in HANGED MAN. To be honest, it’s a huge part of Rune’s own growth as a “young power”. As he sees more and more of how Atlantis is really run, he’ll find more and more occasions to break the status quo.

Do the USA take responsibility for New Atlantis, so to speak, since they are so close, or wash their hands of them completely? Meaning, if another country or countries tried to wage war (however ill advised that’d be), would the USA join the Atlanteans to try and avoid collateral damage to US soil, given the proximity, or would they be more likely to join forces with the attackers? Or, be Neutral? How about vice versa? Would they aid the US if it was invaded?

No — there was a treaty that ceded the land to Atlantis, but only after Atlanteans secretly bought up nearly all of the property on the once-wealthy little Massachusetts island. But America hasn’t washed their hands of New Atlantis entirely. They keep a close eye on the island. As powerful as Arcana are, they wouldn’t be able to stand up to the entire human world, if the human world turned hand against them.

I will say this: the way New Atlantis interacts with humanity will be a pivotal part of the second and third trilogy.

You’ve said you’re planning 9 books in The Tarot Sequence in 3 cycles: If you were to give a general, non-spoilery theme to each arc of the whole story, what would it be?

I can do that! In the first novel, THE LAST SUN, I hint to the reader that Rune is not always a reliable narrator. Something happened the night his court fell, and he’s keeping it from everyone. The first trilogy involves that secret — and it will ALL come to a head in TAROT 3.

The second trilogy involves the secrets that have always been kept by Rune. Who really destroyed his home? What are their plans for the city? This is the trilogy where Rune operates on a city-wide scale.

The final trilogy is all endgame. Nothing left off the table. The role that Atlantis plays in the human world; the remains of old Atlantis…. Everything is important.

Welp. I don’t know about you guys, but now I need every book in this series in my eyeholes right this second.

Thank you again so much to K.D. Edwards for giving me all of the answers I could hope for.

Also, good to know that Addam and I have pretty much the same playlist. ^_^

You should definitely get your hands on a copy of The Last Sun if you haven’t already! The Hanged Man releases on December 17th, 2019 (which is almost now, but there’s still time to preorder!) 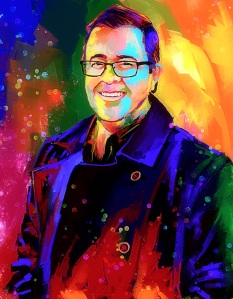 K.D. Edwards lives and writes in North Carolina but has spent time in Massachusetts, Maine, Colorado, New Hampshire, Montana, and Washington State. (Common theme until North Carolina: Snow. So, so much snow.) Mercifully short careers in food service, interactive television, corporate banking, retail management, and bariatric furniture have led to a much less short career in higher education, currently for the University of North Carolina system.