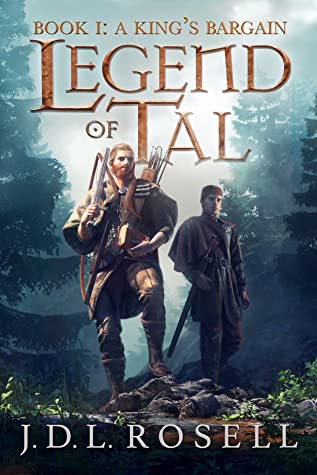 Moving right along into my pile of SPFBO books!~

The legend of Tal Harrenfel is sung across the Westreach – and with each telling, the tales grow taller. But though he’s declared a hero by his King, Tal has never claimed to be more than a man…

After three decades of fighting warlocks, killing mythical beasts, and hunting enchanted treasure, Tal has had enough. Running from the deeds of his past, he retreats to his home village under a different name and meets an unlikely companion: Garin, a village boy who dreams of making a name for himself and seeing the world beyond their sleepy town.

When Tal receives a mysterious visitor, both he and Garin find themselves thrown into a sojourn across the kingdom. Soon, they become embroiled in the plots of monarchs, on the frontlines of an ancient war, and at the mercy of a fabled sorcerer.

Now Tal must live up to his legend, and Garin discover his own power, to survive the forces pitted against them…

This is the story of Garin, who is a young farmboy who lives in the tiny sleepy village of Hunt’s Hollow. He spends a lot of his free time hanging out with the odd chicken farmer named Bran, who is, among other things, awful at farming chickens.

One day, Bran has a visit from an old acquaintance of his, letting him know that he has a summons from the King. Bran takes Garin with him when he goes, and as they travel, Garin learns what Bran can teach him, about everything from swordfighting to reading and writing.

Of course, Bran is quite a lot more than he appears (not a surprise to anyone… except Garin) – he’s really Tal Harrenfel, the legendary warrior, Magebutcher, Red Reaver, etc, etc, etc. A man who bards sing the exploits of, and whose name is known pretty much all over the land.

This was the sort of epic fantasy that I enjoyed reading when I was young. Old Hero takes Young Apprentice on Coming of Age Journey to kill an Evil Magician on The King’s Orders.

Don’t get me wrong. I enjoyed it quite a bit, even though it does very much include many tropes that you can find in a whole host of epic fantasies from time immemorial. It uses them well, though, and I think that’s why I latched onto it so easily. I found myself reading until well after it was bedtime. It was well written, paced well, and well edited. I enjoyed the characters quite a lot. It was easy to cheer for Garin and Tal. The Big Secret that was supposed to stay secret did so (at least to me) until revealed.

This one ended in a good place and left me with questions, but without leaving a cliffhanger. I think that one day soon I may attempt to insert the next volume in the series into the extremely-tippy-jenga-tower of books that is my TBR. 7.5/10 stars!~