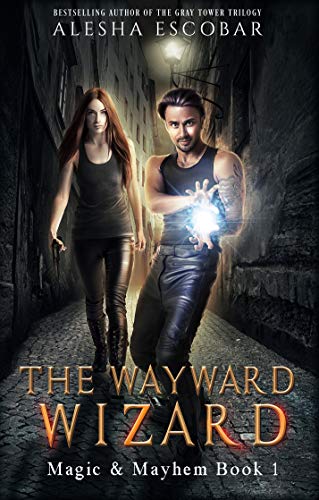 Hello and welcome to my first review for this year’s Self-Published Fantasy Blog-Off! Today I’m reviewing The Wayward Wizard by Alesha Escobar which is the first book I finished from my pile.

I’m the last person a secret government agency wants to call for help.

I spend my days selling New Age trinkets to humans and my nights drinking with a street-hustling alchemist. Not exactly the law and order type. But when monsters from our childhood nightmares become flesh and blood, snatching people from the streets, I’m one of the few wizards alive who can uncover who’s behind it.

My past threatens to catch up with me, and I’m not sure I can outrun it.

After losing my family in a fire and being whisked away by my caretaker to train at the Akashic Academy, my life was further turned upside down when I emerged from my final test to find three dead master wizards. Despite being cleared of all charges, most in my community believe I killed them.

They call me the Wayward Wizard.

I may be a black sheep among magic-users, but I deliver results. Which is why this secret agency has dragged me out of bed, slapped the bottle of whiskey out of my hand, and placed me with Alanna Reid. She’s their best (and most uptight) agent who’s been ordered to keep an eye on me and make sure I get the job done—or, put a bullet in me.

But as good as Alanna is, even she may not be prepared for what’s coming. And if I can’t shut down the mysterious wizard wielding stolen powers, then I have a demigod looking over my shoulder, salivating at the thought of bringing on the Apocalypse as punishment.

It’s like the teacher penalizing the entire class for one asshat’s actions, but on a cosmic level.

But something tells me that in unraveling the truth, I’ll also have to face my own monsters, which can be just as deadly.

This is the story of Jack Crowley who is a wizard living in Los Angeles. Wizards in this world have two sets of powers, a main one and then a secondary. Jack is a True Name wizard, first and foremost, which means that he can influence things that he knows the true name of. His secondary power is Elemental, meaning pretty much what it sounds like.

Jack is known as the Wayward Wizard, after an incident back in wizarding school left several people dead with Jack taking the blame. He knows he’s innocent, but despite him being cleared of charges, most of the wizarding world still thinks he is guilty. So he is a pariah, more or less. He works in an occult shop selling magical flimflam to humans, when one day a human man comes in with a very magical sword and demands to know whose it is, because it was used to kill his brother. He is paired up with an agent from what is basically the wizard FBI, and her automaton friend, and they go investigating who is to blame. And there are many shenanigans to be had.

This was a quick read, and I read it in just a few hours. It always had something going on, so I was never putting it down out of boredom or anything like that. It was easy to just begin and keep on reading. Jack was an easy character to cheer for, as we see this from his point of view. Alanna, the secret agent, was also a neat character, but overall my favorite was Lucas, who is the automaton. He’s more or less a magical robot, but he appears to be capable of emotion and other more human-like things so it was interesting to see how he would react to certain things. I enjoyed the story, and while I did guess the identity of the baddie, it wasn’t detrimental to my enjoyment of the story at all.

The pacing was alright for the most part, but at times the novel felt a bit rushed. For example, some of the relationships between characters seemed unbelievable given the time frame of the novel. Basically, what I mean by this, is that Jack seems to go from being the sort of dude who doesn’t trust many people and absolutely does not make friends easily to having these three random friends who he risks his life (more than once) for. All the characters went from ‘I’m going to try and fight you’ to ‘I don’t really trust you’ to ‘we’re besties now’ in a matter of days. Not many days, either. Another pass of line edits might bring some cohesion to this sort of thing.

Finally, there are a whole bunch of similarities between this book and a certain series of books about a world of secret wizards concurrent to our own human world. I mean, I did expect some, but there were times where it seemed a little much. The characters in this one are adults, and this takes place in modern day Los Angeles, but all the same, this world has aspects to it that reminded me of everything from Azkaban, Diagon & Knockturn Alley, the Dark Mark, the Ministry of Magic, to the school itself. This might be in the eye of the beholder though, and I don’t think that it made it less enjoyable as much as it occasionally read like a story written in that world but with original characters and the names of things changed to suit the setting.

All told, I had a good time with The Wayward Wizard, and I would recommend it to people who like stories about wizards, or people who are into Urban Fantasy. And yes, fans of Harry Potter, lol. 6.5/10 stars!~

2 thoughts on “SPFBO Review: The Wayward Wizard by Alesha Escobar”