All Done reading my pile!

It’s time to cut the last of my books, announce my third semifinalist, and get Team Weatherdrifter even closer to our finalist! 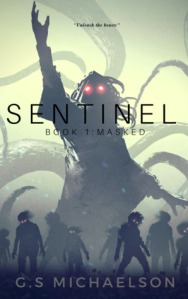 Masked is the story of Tyrone, who is a Sabre, or… something like a superhero. In this world, there are people who have a host of magical abilities and use them to save the normal people from villains. The villains in this case are the organization Masquerade and their beast masks.

This one didn’t really resonate with me, as I had trouble getting into it. It definitely has an audience though. I think that people who like anime like DBZ wherein fighters holler out move names as they start kicking butts would like this book. It’s like X-Men meets DBZ. 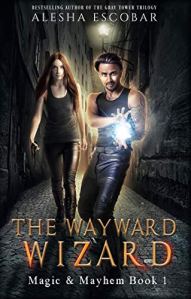 The Wayward Wizard by Alesha Escobar (click for full review)

This is the story of Jack Crowley who is a wizard living in Los Angeles. This was a quick read, and I read it in just a few hours. It always had something going on, so I was never putting it down out of boredom or anything like that. It was easy to just begin and keep on reading. Jack was an easy character to cheer for, as we see this from his point of view.

I enjoyed the story, and while I did guess the identity of the baddie, it wasn’t detrimental to my enjoyment of the story at all.

All told, I had a good time with The Wayward Wizard, and I would recommend it to people who like stories about wizards, or people who are into Urban Fantasy. And fans of Harry Potter~

This is (obviously) a retelling of the tale of Robin Hood, though some of the details are different than in the tale as it is typically told. In this version, what stood out the most to me is that Robin is not a nobleman, but the peasant son of an ailing farmer.

I had a bit of a tough time getting into it but once I was, I read 2/3 of it in one sitting. Robin is an easy character to cheer for, and the Sheriff of Nottingham is so easy to hate that it made it an easy read. It reads really quite fast and it’s paced well.  The book was really well written and well edited. All told I thought it was a really entertaining retelling.

If you enjoy the tale of Robin hood, you’d probably enjoy this version of the tale.

Truth and Other Lies by Lyra Wolf (click for full review)

This is mostly a retelling of Norse Mythology, specifically of Loki, told from his point of view. Loki is, even despite all of his shortcomings, a really easy character for me to cheer for, and seeing this one from his point of view was nice. He’s definitely not a hero, but he’s not really an antihero. He’s somewhere between those things.

The book was well written and was paced pretty well. I never found it boring or slow. Admittedly there were a few times where the language seemed overly modern for the story at hand. All told, I had a good time with Truth and Other Lies, and if you’re a fan of Norse retellings, or just of Loki in general, you might like it too! 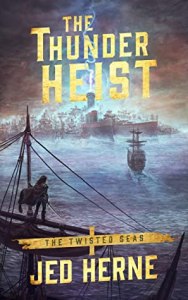 The Thunder Heist by Jed Hearne (click for full review)

This is the story of Kef, who is a woman who lives in a world where most of the cities are in fact fleets of ships. One of those ships, a city called Zorith, is powered by a giant tower which harnesses the power of lightning rather than using the oil that the rest of the world of ships relies on. Kef is going to steal it.

The Thunder Heist has a steampunkish sort of vibe, which I enjoy a lot, but I didn’t really find myself cheering for Kef, or liking her much at all, but the heist aspect of the book kept me reading to see how it would play out. I liked it quite a lot but didn’t love it like I’d hoped to.  If a book that’s like Waterworld meets The Scar meets Ocean’s Eleven sounds interesting to you, then I think you may enjoy this story!

The Gatekeeper’s Staff by Antoine Bandele (click for full review)

Tomori Jomiloju (or, just TJ) Young is a 14 year old boy who lives in Los Angeles. He is part of a secret community of diviners. Though he never manifested any magical abilities himself, his mother, older sister, and younger brother all have various magical powers. His older sister Ifedayo mysteriously dies in Nigeria, leading to all sorts of paranormal shenanigans, and TJ finds himself not only suddenly having magic, but having to learn to use it as well. He enrolls in a magical camp in New Orleans. From there, the Orisha adventures never stop.

This book could be enjoyed by anyone from middle-grade onward. It takes the magical school trope and made it seem unique by combining it with mythology from the Yoruba religion. The Orishas are interesting mythological figures to read about, and I think they lend themselves well to a world of magical shenanigans. The book was quite long, by middle-grade book standards, but I never found myself bored with the story, and it was always easy to get back into it.

The audiobook was narrated super well, and if you’re into YA magical shenanigans, this book is definitely for you. I enjoyed my time with it, quite a lot, and I recommend it to anyone interested in magical academy stories, or West African mythology. 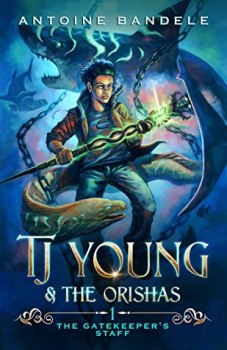 Don’t worry. Esme has already read two of them in the time it took me to announce them. ^_^