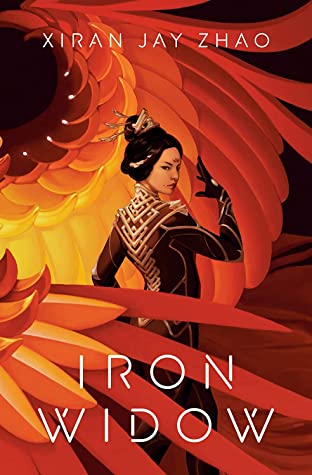 As soon as I read the blurb for this book I knew that I wanted to read it, and so when an opportunity to do so slid across my radar, I was on it immediately!

So thanks to the author, as well as Penguin Teen via NetGalley for the review copy!~

The boys of Huaxia dream of pairing up with girls to pilot Chrysalises, giant transforming robots that can battle the mecha aliens that lurk beyond the Great Wall. It doesn’t matter that the girls often die from the mental strain.

When 18-year-old Zetian offers herself up as a concubine-pilot, it’s to assassinate the ace male pilot responsible for her sister’s death. But she gets her vengeance in a way nobody expected—she kills him through the psychic link between pilots and emerges from the cockpit unscathed. She is labeled an Iron Widow, a much-feared and much-silenced kind of female pilot who can sacrifice boys to power up Chrysalises instead.​

To tame her unnerving yet invaluable mental strength, she is paired up with Li Shimin, the strongest and most controversial male pilot in Huaxia​. But now that Zetian has had a taste of power, she will not cower so easily. She will miss no opportunity to leverage their combined might and infamy to survive attempt after attempt on her life, until she can figure out exactly why the pilot system works in its misogynist way—and stop more girls from being sacrificed.

This is the story of Wu Zetian, who is based on the only female emperor in Chinese history. Similarly to that Wu Zetian, this one overcomes a mountain of misogyny and gender roles to become something that nobody expected that she (or any girl) would.

This takes place in the world of Huaxia, where young men team up with girls in order to pilot giant mechs to battle the fierce alien Hunduns that attack their planet. However in ‘teaming up’ the girl is nearly always sacrificed, dying from the mental strain. Nonetheless, girls across the world enlist with the hopes of becoming a pilot’s ‘Perfect Match’ and earning all the fame and notoriety that comes along with that. Zetian’s big sister was sacrificed in battle, and she’s enlisting with every intention of assassinating the pilot who killed her. When she goes into battle with him and succeeds in her plan, the army labels her an Iron Widow, and sticks her with the strongest and most infamous pilot, Li Shimin, who has killed every girl he’s ever gone into battle with. She teams up with him hoping that together they can figure out why the piloting system works the way it does.

I read this book in two sittings, because it was that engaging. I absolutely loved Zetian as a character, and she’s very easy to cheer for. She’s been oppressed by the patriarchy her entire life, as has her mother, and grandmother, and she is just super fed up with the way things are and takes changing the world into her own hands. She’s 100% done with everyone’s BS and is a bit full of snark on top of that. She’s exactly the sort of character I love to cheer for.

Iron Widow is a tale that takes inspiration from Chinese historical and mythological figures and imagines them in an alternate universe that’s a giant mecha anime with real designs on smashing the patriarchy (and then when it’s smashed, smashing it some more). It reads like Evangelion meets The Handmaid’s Tale with some Hunger Games sprinkled in, but while I can compare it to those things, it is its own unique story that has all kinds of twists and turns that I wasn’t expecting. There’s swearing, torture, giant mecha alien battling, and a love triangle that says ‘lol, no’ to love triangles and turns into a poly relationship. I mean I looked at this book a few times and muttered an unironic ‘yasss’ at it. It was one of those.

If you like mecha anime, strong female leads, and just… doing a massive smash on the patriarchy, do read this book. I absolutely loved my time with it, and have already recommended it to a dozen people. 5/5 stars!~