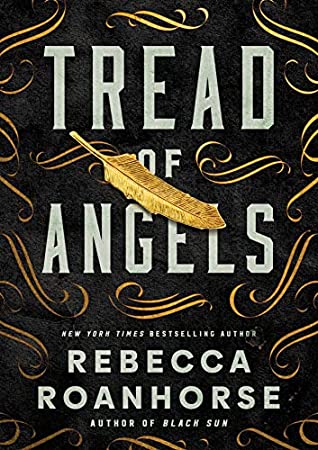 I’ve enjoyed everything that I’ve read by Rebecca Roanhorse and so when this popped up on my radar, I couldn’t help but request a copy. Of course it helped that it sounded so interesting.

So thanks to the author, as well as Saga Press via NetGalley for the review copy!

High in the remote mountains, the town of Goetia is booming as prospectors from near and far come to mine the powerful new element Divinity. Divinity is the remains of the body of the rebel Abaddon, who fell to earth during Heaven’s War, and it powers the world’s most inventive and innovative technologies, ushering in a new age of progress. However, only the descendants of those that rebelled, called Fallen, possess the ability to see the rich lodes of the precious element. That makes them a necessary evil among the good and righteous people called the Elect, and Goetia a town segregated by ancestry and class.

Celeste and Mariel are two Fallen sisters, bound by blood but raised in separate worlds. Celeste grew up with her father, passing in privileged Elect society, while Mariel stayed with their mother in the Fallen slums of Goetia. Upon her father’s death, Celeste returns to Goetia and reunites with Mariel. Mariel is a great beauty with an angelic voice, and Celeste, wracked by guilt for leaving her sister behind, becomes her fiercest protector.

When Mariel is accused of murdering a Virtue, the powerful Order of the Archangels that rule Goetia, Celeste must take on the role of Advocatus Diaboli (Devil’s Advocate) and defend her sister in the secretive courts of the Virtue. Celeste, aided by her ex-lover, Abraxas, who was once one of the rebels great generals, sets out to prove Mariel innocent. But powerful forces among the Virtues and the Elect mining barons don’t want Celeste prying into their business, and Mariel has secrets of her own. As Celeste is drawn deeper into the dark side of Goetia, she unravel a layer of lies and manipulation that may doom Mariel and puts her own immortal soul at risk, in this dark fantasy noir from the bestselling mastermind Rebecca Roanhorse.

Tread of Angels is the story of Celeste, who is a card sharp, and a Fallen. In the city of Goetia, there are descendants of Lucifer and those who rebelled with him, and they are Fallen. They are the lowest class of people, but necessary, as only they can see the element of Divinity, used to power all kinds of neat things. The descendants of those who fought against Lucifer are Elect, and those who run the city of Goetia are Virtues. When Celeste’s sister Mariel is accused of murdering a Virtue, Celeste takes on the role of the Devil’s Advocate to defend her, and many shenanigans come to light.

This was an interesting story, and I quite enjoyed it! It’s quite short, more of a novella, but it was just long enough, I thought, to get the whole story out. I really enjoyed the world of Goetia, which was something like a noir/western feeling place, but with weird technologies that were powered by this new element they call Divinity (mined from the remains of Abbadon). The world reminded me somewhat of Trigun for some reason, so that might help some of you decide if you’d enjoy it.

All told, I liked this one. Read the whole thing in an evening and it was still making me think about it and imagine the world it takes place in over the next couple of days, and into the start of another book. So that is always a good thing! 4/5 stars!